Hey friends! Boy it’s hard to keep up with all of the things. On top of working a lot I have a board game side project that I’m having the hardest time making progress on, and I’m also trying to spruce up a life counter app that I made, so that I can proudly present it to the world, after having left it in the same state for a couple of months… Anyways, I’ll keep trying to bring you my updated designs in a timely fashion, and this week we’re going to see a couple more instant and sorceries! If you know final fantasy VII, you’ll understand why I called them limit break. 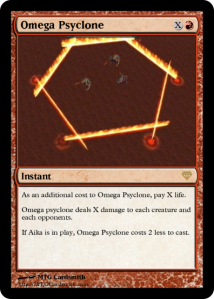 The first of the two is Omega Psyclone. As you can see, the spell is connected to Aika. If you haven’t seen her yet, take a look at one of my first articles here to see what she looks like! Omega Psyclone is one of her attacks in the game (a limit break in FFVII). So the idea is that it will be more efficient when she is on the battlefield, rather than only playable then. That being said, Omega Psyclone is a little overpowered. Turns out there is very few spells that deal damage to all creatures, and most are not very recent. At best they have big requirements before they can take full effect, like with the best in recent memory, Bonfire of the Damned.

What’s the fix? Well for one thing this kind of effect is most of the time given only as a sorcery. Quite often it doesn’t kill flyers but we might not have to go that far. Did you figure out the point of making the caster of the spell pay life in the initial design?Since it’s related to the cost of the spell, when Aika is in play you would have to pay less! Pay 3 life, have all opponents and creatures take 5. This is neat, but life loss is just never printed in red, so let’s give that up. What I figured is, since I’m tuning the card down a lot, I could make its cost even higher, and get to the Flame Wave territory. It might still be a little powerful as a versatile flame wave, but it’s more expensive, so we should be ok. There we go, done!

Now Lunar Cleansing. One of the weakest spells I designed back then. Regenerate all your creatures isn’t something unheard of, as in most recent memory with Golgari Charm. 1 life on top is hardly anything at all though, compared to the versatility of the charm. We all know that there were never any colorless instants and sorceries outside of Rise of the Eldrazi. This is very conscious for us though, as “silver” is a color in our Skies of Arcadia Magic edition, as you can see with the design of Fina, Silver Princess, my first design on this blog, which Lunar Cleansing is related to. The last weirdness is trying to keep track of the creatures you did regenerate, as win only as much life. Let’s get rid of that.

So how did we fix Lunar Cleansing? I’m ok keeping those spells that are related to character as rares, even though it made me design way too many rares so far… What I’m happy with, is to make it a bad rare for a change. I toyed with the idea of making the creatures indestructible, but that didn’t fit the flavor of the cleansing. As of now, if you don’t control Fina, Lunar Cleansing is still a spell that regenerates all your creatures for 3. Which is meh, a little better since it’s colorless. And when you do own a Fina, you can gain 3 life per creature you control, which is still good but not crazy, and totally conditional. All in all I won’t particularly advise you play that card in limited, but we need those kind of cards!

That’s it for this week! In the future I’ll consider making only one card a week, and I will also think about talking about other subjects, more designs that are not from Skies of Arcadia, as I’ve done before, and others about rulings, and other various news maybe. Plus I might give you a peak at my Android app, so stay tuned!