Hey all. Wizards started the spoilers season with a whole lot of cards this time, and they feature all the mechanics of their next edition, Born of the Gods! Let’s have a look at them and their mechanics. First the ones we already knew from Theros. 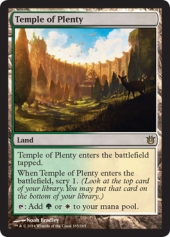 Scry lands. They are fun, they are fairly powerful, they are pretty, they are probably 5 but so far we get the Selesnya, Azorius and Rakdos ones.

Somehow mass damage to all flyers isn’t the most natural thing to fuel by devotion to me, but it’s more a gut feeling than anything. Should be a pretty powerful card. I don’t remember Theros being that big on flyers, but I would already totally side that to get rid of some Vaporkin and Nimbus Nayiad. Looking forward to discovering how many cool birds there will be in Born of the Gods. 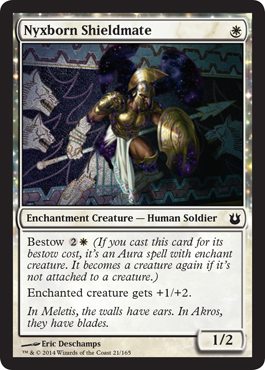 Everflame Eidolo / Nyxborn Shieldmate. Seeing how wizards insisted one the bestow cards cycles being very symmetrical, one more eidolon could mean a full cycle of eidolon. Actually I just checked and only Black and White have eidolons so far… How about: there will be 3 more eidolons, and black and white will get bestow versions of Holy Strength and Unholy Strength (check out the new illustrations on those, they are goregous)? If that’s the case, the black one might be very powerful!

I’m having a hard time with Heroic. It does work, but it’s annoying to have to target creatures for a different reason than “this creature wants that spell, enchant or combat trick”. This is only moderately problematic when you are playing aggressive heroic creatures who actually need those, but how about defensive creatures with defensive heroic abilities?

Well I guess you could apply defensive auras, bestows and possibly tricks to them… Instant speed discard is sweet though. 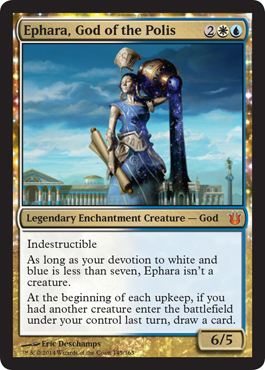 Ephara, God of the Polis.

Here is the first two colors God! Really pretty illustration on that one. It’s interesting how the required devotion to the two colors got bumped all the way to seven. At first I thought you would need 3 devotion to both white and blue, and I do feel like either are slightly confusing.

Also interesting how this girl has only one static ability, unlike the mono-colored Gods, and hers hints strongly at a “flash” creatures theme… Exciting.

Archetype of Imagination is the first card that doesn’t contain a mechanic from the previous block, and it’s announced to be part of a cycle.

Interesting to try thinking about what kind of ability the green or black “archetypes” will grant to your creatures, and if they would “steal” those from your opponent’s creatures as well. Deathtouch? Lifelink?

Also interesting to see that those are enchantement creatures without bestow, which to me hints at a possibly even stronger enchant theme… This guy (girl?) will rock on limited!

Here is our first new mechanic card! “Inspired”, will apparently trigger when the creature untaps. A generic ability that just needs you to attack with your creature (or tap if for an effect if you can)… That’s fairly boring as a mechanic if you ask me.

I’m sure it’ll be well balanced and this one is fairly powerful, it’s just not especially exciting because too simple as far as I’m concerned.

And there I strongly dislike. Again, I understand those will probably be balanced and powerful enough, maybe even fun, but why would you want to play cards that give choice to your opponents!?

If you have read my very first article, you will understand I find it annoying, and it will give your opponent an edge if he’s a better player than you, or just a good player with access to information you don’t have… But oh well, I’m sure those will be playable, and I sure will enjoy deciding for my opponent when they play one!

This just in: another “Inspire” card, Pain Seer.

The new Dark Confidant, though less powerful. It is a bit weird to have to attack with your little card advantage guy, but why not… Maybe there will be some combos, or more mid-range strategies to empower it.

I do enjoy their attempt of making more 2 drops with this ability though, much like Blood Scrivener, which actually looks like he likes to hangout in the same dungeon! (see illustration)

So here it is! Even though I don’t fully subscribe to the design choices, this is exciting stuff, and bound to be enjoyable to play. I won’t comment on all the spoilers from now on, just know that there will be a couple of a new ones every day on daily mtg and be sure to check their updated gallery containing all of them! Pre-release is on the 1st of Feb, I’ll talk to you again before then!. Have a good week!

1 thought on “Born of the Gods”