Hey everybody. I have been taken away from my initial article plan. I meant to tell you about black removal spells, but I couldn’t resist the call of the gods any longer. Here is what happened.
The gods of born of the gods being minor gods, they don’t get all the attention Heliod, Thassa, Erebos, Purphoros and Nylea, who are getting ordeals, weapons, emissaries. I have made ordeals for the minor gods already, but it’s time to show them my devotion once more, this time with weapons.

You probably already know the weapons from the Theros block. They are mostly great, game breakers in limited and even sometimes pretty good in constructed. Can we make something similar? I say yes, with the difference that I think they should be somehow harder to take advantage from, because of the “specialized” aspect of each two colors combinations. Let’s see that. 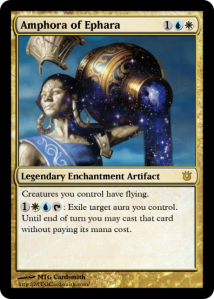 Amphora of Ephara has an terrible sounding name. What can I say, that’s what she’s holding, and that’s the way those cards are templated.
I’ll be honest I just read that design again and I think I went too far! Flying to everybody should cost more than 3, even in two colors, especially if there’s another great ability in the mix. This would need to be fixed…
The secondary ability is neat though. It’s meant to be used to move auras around and trigger heroic. though I just realised you probably wouldn’t be able to use bestow with that… Maybe I need to rework the whole thing.

Halberd of Mogis is getting there. I wanted to go for something different than the usual cheap weapon, and I also thought double strike could be fun.

It’s so powerful that it needs to cost at least 6, to be honest I’m not even clear that’s enough.

The second ability is gravy, being able to deal damage straight to players and creatures is nice, but you might want to attack with double strikers instead!

Throne of Karametra. I like that those gods have very different tools / weapons.

I think I wasn’t sure if I should have all weapons grant a classic ability to all creatures, then have an activated ability on top, but I decided I would.

It’s a very simple, somewhat classical weapon in the end, but it’s still fairly good, and aggressively costed, so I like it! 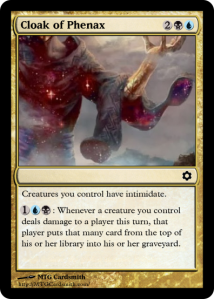 Cloak of Phenax is another one of those not-quite-weapons but it’s cool.
It really needed to have intimidate on it, which is quite powerful to give to all creatures, but also spot-on flavour wise.

From there I decided to make the second ability less powerful, and still on flavour, so milling it is. Note that I let that one the possibility of being activated twice in the same turn, which could be pretty nice.
This weapon is also one of the best to use with the god himself, which I didn’t always have in mind.

The last one is our star, Lyre of Xenagos! Xenagos being a major participant in the story of Theros, I wanted to make sure to make a great weapon for him.

Trample is also a must for Gruul colors, seems quite evident to me.
Then it took me a long time to find something that had not been done yet, but I’m actually very happy with what I ended up finding.

Kessig Wolf Run for every body! As long as you can pay for each, of course.
All in all those weapons aren’t my most polished designs, but someone had to do it! As Maro says, humans look for completion in patterns and I know I do more than many. It is pretty fun to make designs for cards that would logically fit the cycles of Theros. Time will tell if I should be making some emissaries! That could be fun too… You can tell me if you really want them 🙂

No matter what, have a great week! Talk to you later.