Hey all! Let’s change things up this week and go back to our mono-colored series. If you haven’t read the previous ones, check out the green, white and black articles! Today we are doing blue, and blue’s specialty is instant and sorceries.
When looking for blue spells of mine, I found extremely few of them. In fact, all of them were part of limited decks I created. Three out of the only four I created where even from of the same Simic deck! That being said I only created 1 limited deck with blue, and barely started a second – Esper. I don’t find blue spells easy to create, so this should be a challenge; let’s see what I came up with. 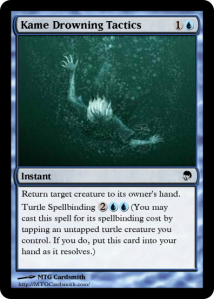 Kame Drowning Tactics introduces “Turtle Spellbinding”.
You heard right, the simic deck was constructed around a turtle tribe. Turtles never had their moment of glory in the past, but they should! Turtle spellbinding means that you can play this instant by paying a bigger cost, tapping an untapped turtle, and if you do you will get to keep the instant after casting it!

So, is 4 manas and “tap a creature” too expensive to have recursion on a bounce spell? It’s actually probably still too cheap. Let’s talk more about balancing recursive spells with the next card. 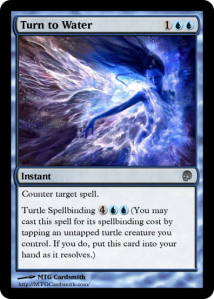 Turn to water is going to make things even trickier. You see, recursion – using the same card over and over – has existed several times in the past, through for example Splice and Buyback – let’s not complicate things with semi-recursion like Flashback.

It’s pretty simple: if you want to allow recursion on cards, you have to make it very expensive. That’s even more true with countermagic here. If you compare Kame Drowning Tactics with Capsize and Turn to Water to Forbid, you might realize one is extremely powerful, and the other probably even over-powered.

I wouldn’t judge the power of the card based on the fact it imposes you control a wizard to use the spellbinding though, just evaluate the card’s efficiency when you do.

It is probably too good again, as fully locking two creatures for 5 is way powerful, especially when you lock them for two turns, and can redo it each turn!
I love the downside of blue creatures being immune to ice, though. 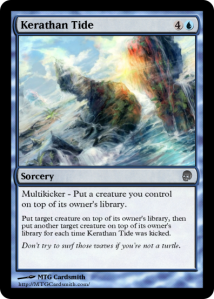 Kerathan Tide. At last a card with a different mechanic.
Remember Multikicker? It was introduced in Worldwake as an extension to the Kicker mechanic from Invasion.

The card itself was quite obviously based on Griptide, but giving you the ability to send your own creatures to the top of your library to send more of your opponent’s on his/her own, for one more mana and a downgrade to sorcery speed.
Now griptide already being pretty efficient, I don’t think we want to allow its user to pitch small creatures to send 1, 2, or 3 more away on the other side! Maybe paying two creatures against one?

I was frustrated using only cards from my limited decks, and showcasing only two mechanics, so I made Mind Sacrifice. It is largely similar to Kerathan Tide.

What blue mechanic haven’t we tried yet? Milling! It’s not exactly easy to balance mill either; it’s easy to slip from useless to overpowered, since it’s pretty much what milling at large is! I tried to take into consideration Mind Funeral and Traumatize, but that only helped me so much.
I think it’s not too bad as is now, guarantied 14 cards isn’t nothing. Being able to self-mill 21 will also enable to crazy combo decks!

Well, this wasn’t quite as bad as I expected. I’m still not quite comfortable with blue spells, but maybe it’s because I was sticking to the classic themes. You have to keep in mind that even combat tricks and creature spells are available. I was going to ask about other classic blue effects I might have missed, but as I’m editing this article, I realize I haven’t done drawing! This will have to be fixed.

Right now it’s time to say have a great time and see you next week!