Hey all. I’ll be honest, when I started writing this article I was mostly thinking about the next stage of the design contest. In that sense it’s a follow up of last week’s article, hence the title. I gathered quite a few votes last week, mostly from reddit, and here are the semi-finalists: Forges of Insanity (61%), Damion Colebane (57%), Binding Ritual (51%), Lord of Lambholt (67%).
It’s surprising to see Lord getting the most votes, as he was also criticized the most by other people, for understandable reason – one of which being an anthem in black.

Either way, this week we are doing the semi-finals, and for that I will use the fantastic looking versions from redditor Amane_VIII, made using Magic Set Editor. Here we go: 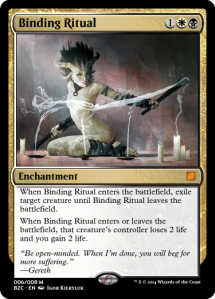 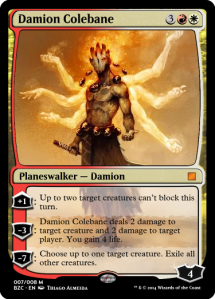 Don’t they look amazing? I just realized that there is a mistake on Binding Ritual though, it’s supposed to drain your opponent’s life for 2 when it comes into play, and drain you back when it leaves. Please vote though; I’m excited to know who will win, and you might still get to win something!

I don’t want to make this post too long, but I thought I could slip some new design in it, as it’s been a couple weeks since last time I did.

Old Ways Emissary is an attempt to make an artifact hoser for formats like Modern or even Legacy. I didn’t want to make it straight up kill those decks, but that’s something sidedeck cards tend to do in those formats – see Hurkyl’s Recall or Stony Silence.

I love the idea of shutting down triggered abilities; while somewhat weird, it attacks from a new angle.

You might have noticed that I used Magic Set Editor here and I love it… I’m not sure I will sustain this in the future though, as it takes longer to use and I’m usually not around my windows desktop when I make cards. Time will tell!

I’m glad the previous round of design contest had so many votes, and I’m looking forward to this week’s results and next week’s finals. Hope you are too! Have a great week.