We passed the 50th article mark last week, and now is time for a last article before I’m off for a week on holidays! I’ll make it worth your time though, by posting a whole cycle of 5 cards. This one is about pushed 2 drop creatures with a downside, in allied color combinations. Sounds good? So let’s see what we have in store for Azorius, Dimir, Rakdos, Selesnya and Gruul. 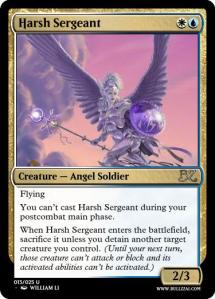 Azorius isn’t the easiest color combination for downsides. Sending your own creature to your hand would be an obvious solution, but it can be used as an advantage too easily. I figured that detaining your own creature could be an interesting downside. It also makes it so that you can’t play it before having another creature, which I now realize resonates a little too much with another creature we will see later on.

The body on Harsh Sergeant was much simpler to figure out. Flying was obvious, and I needed a good creature, so 2/3 sounded like a fair deal. I do feel like 3/2 would have been too strong.

Frenzied Ghast was my original idea for this cycle. I just wanted an unblockable 2/2 for 2 and tried coming up with a reasonable downside.

Losing 1 life every time might be too much, as it really only gives you 1 life margin, but if you ever boost Frenzied Ghast or give it lifelink you’ll be good to go!

All in all this is not the most powerful of the cycle but I believe it is still an ok card. 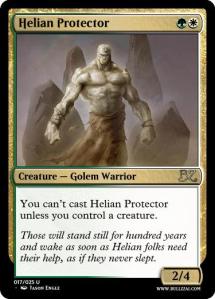 Helian Protector brings with him the perfect Selesnya downside. The conclave is all about all inclusive symbiosis. Selesnya creatures want to have their friends with them. This is why Helian Protector needs you to have another creature before he will even consider entering the battlefield.

It is hard to come up with varied downsides for black creatures. You want a downside that hurts. Most likely sacrificing life, permanents, or cards. I did consider making Tortured Revenant‘s controller discard a card instead of sacrificing a creature, but opted not to. It’s hard to have enough gaz in an aggressive deck.

The idea was that in Rakdos, you want to attack fast with a lot of fairly small creatures. It isn’t too hard to imagine having one to sacrifice, especially as it might have done its damage for the turn already. If it’s too small to attack through blockers, at least it will be used by Tortured Revenant.

Also keep in mind that if no better option presents itself, the zombie warrior can sacrifice himself, after having killed all his friends and hopefully done some damage to the opponent. Not so bad for two mana. It can also trade up for more expensive creatures, and you won’t even have to sacrifice anything else in that case. Tortured Revenant would be great with undying creatures. 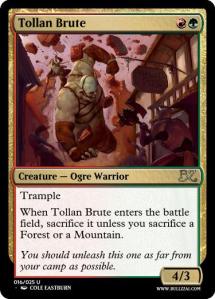 Tollan Brute is based on my childhood friend Rogue Elephant.
Making its transition to the Gruul clan, an extra red mana will get you a 4/4 trampler, much similar to the deadly Ghor-Clan Rampager. You also get the choice to sacrifice a forest or a mountain, better than forcing you to do away with a certain type of land when you might not have several.

Note that Tollan Brute will be considerably worse in constructed format, the more you play non basic lands. Ravnica shocklands like Stomping Grounds will still work though, as they are both Mountains and Forests.

And that wraps it up for this week! I will try and make enemy colors 2 drops for my return in two weeks. Until then take care of yourselves and have a great two weeks!