Hey again everybody, as per usual recently I’m slightly late but still making it! This is time for our Black article, and what better than black to celebrate Halloween? I hope you had a fun one, by the way. I’m quite happy with this week’s theme, as I came up with a whole new color theme that I would love to explore in a full set. With no further ado, here it is: 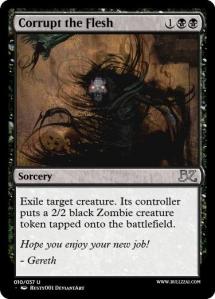 The mechanic I am going to feature is unusual: giving creatures to your enemies! I figured that we could make black a defensive color, even more so than usual. It would have access to powerful spells through giving a 2/2 to their opponents each time. Ideally Black would also be well equipped to deal with those zombies.

Corrupt the Flesh is pretty close to Murder, don’t waste time on that. As Asphyxiate proves, times are hard for straight removal. I think this one is playable, if not exciting. I’m thinking limited here, and bear in mind the block should try and revolve around giving your opponent small-ish creatures.

Bringer of Decay is another example of that. With his protection and slightly unusual body, he will be able to handle at least one zombie a turn, and this without killing them.

This could be useful, as this wizard actually wants its enemy to keep having more zombies, and losing life because of them!

Black in this block should have a bunch of very defensive creatures, able to block 2/2 creatures with or without killing them, gaining advantage with powerful spells with the downside of actually letting your opponent have more of them. Convinced yet? 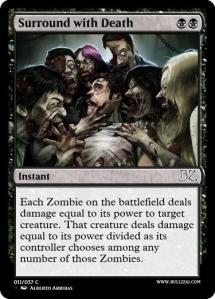 We have a third card this week, using our new mechanic. Surround with Death offers the possibility of having the freshly created zombies turn against any target creature.

You have to imagine that in this block, black would create fewer zombies for itself, focusing on dominating 2/2’s. Here the upside of gaining zombies is turning into a downside again. Your opponent will possibly lose a creature, and maybe a zombie as well.
This won’t scale formidably, but again try and think underpowered limited removal. Magic needs “bad” cards. Ask Maro.

I’m really excited with this mechanic, I think I haven’t done a perfect job of designing around it just yet, but there are definitely some great ideas in there already. I will probably revisit it again in the future. I would be pretty happy to make it the black mechanic of choice for a custom block, provided that I can balance it.

So, I bet you are dying to know what pun I am going to use for our last article, the white one! You can send your ideas if you have any. Until then, you all have a great week!