Forget about puns, it’s hard enough finding a title about white at all! It’s time for the fifth article in the color series, even later than usual but I have an excuse this time: it’s my birthday! Happy birthday to me. Let’s see the cards though, since that’s why we are here. 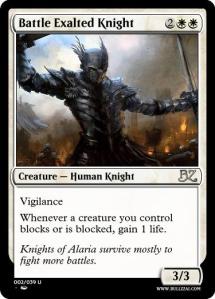 Turns out all 2/3 with vigilance cost 4, have an upside and aren’t all that common anyways. On the other hand 3/3 with vigilance for 4 are few as well, rare cards or – in recent history – have a pretty minor upside.

Knowing this, and the upside on Battle Exalted Knight being fairly nice, I’d say it makes for a slightly pushed, yet reasonable card.

It would probably be pretty solid in limited, but shouldn’t drive people crazy either.

Phasing Blademaster gave me a hard time.
The idea is that it will blink to get through defenders. Before you ask, yes this is a blatant case of “bleeding” in the color pie. Those have to be debated for sure, but can be justified.

I feel like solving the “unblockable” mechanic with something that is very different, and traditionally white, – “blinking” – makes a good case for it.
In the end the design has its flaws, such as how to justify why the card is basically unblockable, yet can be blocked. Why would someone block it? To make its controller pay 2 I suppose. Keep in mind the blink effect could be a fairly important upside.

I like the card concepts this week, but I can’t help feeling like they are still partially unsolved. On the knight it would be a development concern, – costing to be precise – and maybe not even.
For the blademaster though, I am still wondering what is the best way to implement the “blinking unblockable” design. Tell me if you can think of one!

I’m going to grant myself some well deserved rest now, but you can keep looking forward to your weekly posts! Until then, have a great week.