Hey all! Last week someone asked me to make more video game designs and I couldn’t resist the ego stroke; plus it’s handy to have a theme ready for today! Let us see what games I picked and what cards they inspired.

Alexstrasza, Dragon Kin. This one I saw randomly in a forum, and she almost made me pick “badass” as today’s topic. I figured she could be a half-dragon human, which I’m envisioning Dragons of Tarkir could include and guess what, she is actually a dragon in World Of Warcraft!

Her ability reminds of those from Fate Reforged dragons but overall she looks more like a buffed Prophetic Flamespeaker. For power balance I shied away from 3 power, and I made the self mill obligatory as a downside, along with “cast” to prevent free lands. Haste was given as a tradeoff, from that base. 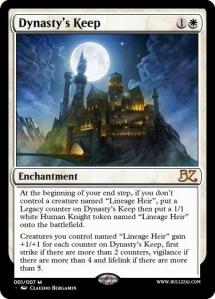 Dynasty’s Keep. I had a hard time thinking of a game that compelled me to make a card for it. So I wondered “what is the game I play frequently?”. The answer was Rogue’s Legacy, a great and fun indie game in which each time you die, your kid or grandkid takes on the fight.
Meanwhile, you better your castle’s training rooms so that each generation becomes stronger than the previous one.
And this is what Dynasty’s Keep is doing as well! Every time your “Legacy Heir” token dies, you will get a new one at the end of the turn and the keep will get stronger. After several generations they will get new abilities as well.

You can see the Legacy Heir token here.

Obviously the biggest issue with this design is how complicated it is. I had to try hard to make it even fit inside a card. I think it’s almost ok at this stage but probably too confusing still.

Great stuff! Still a lot of fun to make those, even though I wasn’t too sure what game to pick to begin with. I hope you enjoyed them; I will now wrap up by mentioning that my friends and I are going to attend GP San Jose on Saturday, which is a Fate Reforged team sealed event. That should be fun! I’ll tell you how well we did.

Time to wish you a great week; see you next time!