If you know anything about Tarkir, I dare you to not guess what clan we are going to talk about today. Jeskai and its masters of the way is the answer, obviously. We are going to give Jeskai Monks their first Planeswalker, which is actually the one that sparked this whole cycle, then focus on an enabler trick for the Prowess mechanic. Should be fun! 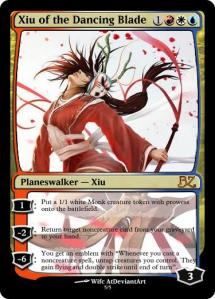 Xiu of the Dancing Blade is first. I could not pass the opportunity to make a card based on such a gorgeous illustration.

Xiu costs 4 in 3 colors, and as such gets a fairly strong +1 ability. Prowess Monks are strong, and could potentially help a whole lot in a control deck. Her -2 on the other hand is less powerfull, but enables Prowess. Getting your best spell back is great, but maybe not as good as having a spell-like ability instead, since you still have to pay for it.

Last but not least, her ultimate is almost an infinite flying crane technique! That’s nothing to sneeze at.

Burn from Withing is our prowess enabler. In the Jeskai tradition, I wanted a cheap tempo spell, which isn’t the easiest to come by in red. Cantrip would be a little much to ask in red as well though, so I figured I was going to help a creature gets through this turn then give it rummaging, which would be close enough for the color.

I still needed something to make the card not boring, and this was the hardest part. At first the ferocious trigger was what prevented a creature from blocking, but you can’t really have a new target in a Ferocious trigger, or it would be weird. I ended up with this “gravy” ability, ok but not great.

I was on a bit of time crunch this time, but the results are fun enough. I would definitely work more on the sorcery card if I had more time, I do think there’s potential there.

Before I leave you, I want to show off that I won a little ongoing contest on reddit that you can find here. The challenge happens almost every week and I won the 60th edition. The winner from the previous round submitted their card, and everybody must draw a magic card at random and create a mashup design between the two cards.
My duty now is to judge for the next iteration of this contest, and I will be picking a winner tomorrow! So that’s exciting. Do check those out and tell me what you think.

Now is time for me to get back to my non-magical tasks and wish you a great week. See you next time!

I made myself lie again! It’s for a good reason too, but I see that every time I set myself up for a certain article the week after, something always come up and interrupts me! Not too worry though, there are plenty weeks in a year.
This time I figured that I wanted to add some cards to each Khan of Tarkir, and I would rather do it sooner than later, seeing that we are already well into Fate Reforged. I will do a full cycle of 5 Khans, with or without intermission. In reality what tends to happen is when I’m a big cycle like this I can’t help but think about all the cards.
We are starting with Sultai and we have three cards this week, so let’s get started! 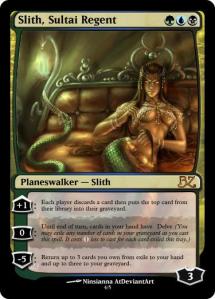 We begin with our Planeswalker, Slith, Sultai Regent, lounging in her serpentine palace. She starts with a plus ability very similarly to that of Liliana of the Veil, so it should be fine.

Her “minus” is very experimental. I know giving Delve to cards is potentially wild, but since it costs a Planeswalker’s second ability activation I can’t imagine it getting too out of hand.

Her ultimate is somewhat underwhelming but it should still be pretty powerful. In that respect it looks more like ultimates from Sorin, Solemn Visitor and Sarkhan, the Dragonspeaker. 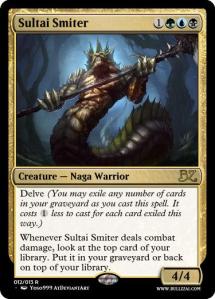 Sultai Smiter is more straight forward and less flashy. Making a 4/4 for potentially 3 different colors and a Delve doesn’t seem overpowered at all.
As a reward for playing an only ok rare, you will get a nice scry-like effect every time you brawl with the cold-blooded brute. Look at your top card, keep it or “delve” it. Seems pretty good, especially when it happens even when blocking or blocked. All in all I would say the Smiter is not quite constructed playable, under Savage Knuckleblade in terms of power and also reminiscent but weaker than Reaper of the Wilds. 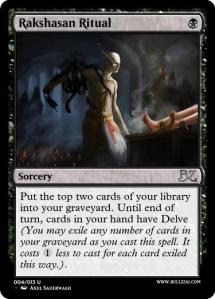 Rakshasan Ritual is our bonus card of the week, and is very much me playing with fire. Storm has had this terrible impact on magic cards that it has made it even more difficult to play with “free” spells and mana.

Same as I mentioned with Slith, I don’t foresee spending a whole card to make other one even way cheaper would be degenerate, even when you throw in the mill effect. I equal it to more or less removing all colorless cost from your next few spells which should be ok, again, if it wasn’t for Storm. I would have to call for specialists’ opinion to know if Storm even breaks it in the end.

Isn’t it nice to see more cards from the Naga brood? Remember, next set most likely won’t feature any new Khan cards. I hope you enjoyed them, you can look forward to more next week. What clan do you think or wish it will be?

Only one way to figure it out, it’s to see you next week! Have a good one.

Hey all. This week I’m not going to stick to an obvious theme, though if I have to pick one I guess it would be something like “semi-competitive two color cards”. Quite the mouthful. I was recently thinking that the successive top-down articles were getting a little repetitive and somewhat contrived, so I let my imagination run free for this batch of designs.

The fact is the cards that you are going to see still emerged, one from a concept-idea and the other from art I found online, so they are not purely mechanical designs. In the future, I want to make cards for the sake of their playability, simple and lean designs, most likely commons or uncommons that are useful in limited mostly if not only. But this is not yet the subject today, as you will see right now.

Card number one is Weremanticore. As you might have guessed, the this is the one illustration that inspired me with a design.
The one important point is I wanted the card to cost 4. Look at those hasty creatures that cost 5 manas: it’s a land of dragons and other crazy things. At it stands, for 4 manas I think Weremanticore is a high power creature that shouldn’t be considered broken, though I guess the highest risk for that would be graveyard shenanigans.
Still don’t see a deal breaker just yet, mostly I think I pushed the envelope for a great Rakdos creature. 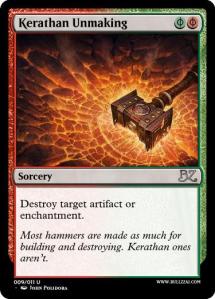 Here is some straight forward design for you now, it’s called Kerathan Unmaking.
Had I made it an instant, it would have been a strictly better Naturalize, which in all fairness might still be possible, but I don’t have that kind of guts today! I don’t think anybody would care too much that the card is “free”, not with all other free cards that aren’t as narrow as this one.
It’s close enough from Naturalize to be playable here and there, but what I don’t know is whether or not there is an incentive to play it over other removal cards in highly competitive formats such as modern or legacy. I would assume not, but who knows; being “free” surely has its advantages.

And that wraps it up for today! It’s refreshing to work without particular constraints, but I’m looking forward our next article, even though making lean, mechanics-oriented designs is the hardest task. We’ll see what comes of it! Until then, you all have a great week.

Hey everybody! I told myself this week wouldn’t be a top-down design week, but something happened that made me lie. It was a design idea from a friend that I based myself on, and it lead me to a great flavour match and topic. Here is it:

Gremlin Breeder. The original idea is to make a morph card that can flip up and down repeatedly and create tokens. In Khans block, goblins are the best to make tokens, especially because morph reminds us of something a little more organic than hiring warriors for example, at least in my mind. Who could best illustrate this effect? Gremlins!
I know blue is a little unexpected here, but I just had to use water to create more of them.

The fact the creature is a 3/1 is very important to make the flipping interesting, and the sorcery speed of the ability should prevent the token making from being even more annoying.

Ghost Trap. I won’t insult you revealing which 80’s classic movie it was inspired by. What I can tell you though, is this one’s flavour was a tricky one to follow as well.
The idea was to have an expensive colorless removal – 8 manas for the first exile – which could be used again, but with the risk of letting all the captured creatures run away free again.
Helvault tells me I probably still costed it too low, especially for an uncommon, but costing aside I think it’s a fun design. It does need to be prohibitively expensive though. Exiling spirit tokens repeatedly is a nice flavour touch that shouldn’t break it either.

I promised I would give you an update from Grand Prix San Jose. It was fun! Though we didn’t get great results… Team sealed is hard and it made us want to train for it some more. It’s great to see a lot of people – and a lot of famous ones as well – and play Magic all day. Fate Reforged is full of bombs and I haven’t gotten a great grasp of the new cards yet but I’ll be working on it!

That being said, I’ll be seeing you next week so you all have a great one.