Friends, after a five weeks cycle, we are now doing a one week, 6 cards cycle! Exciting. This one is a typical case of “completing the pattern”. We have a lot to get through so without further ado I will get started with the first card, the one that inspired the whole cycle.

Master Arcanist. I came up with this design a couple of weeks ago and was pretty happy to fill that design space.
What do blue mages love more than countering spells? Drawing cards! On the paper nothing should be better than drawing cards for having countered a spell.Balancing this design will make it or break it. Most of the time I try and not create a modern staple, so I opted to make it cost 3. There might be a standard environment that wants it, most likely one from the past though as I believe nowadays standard is already faster and more powerful than Master Arcanist. 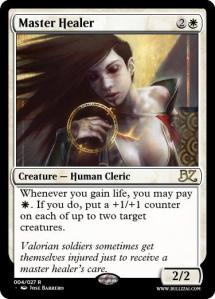 With a crazy twist, we will look at this cycle cards in UWBRG order. You gotta live dangerously.
Next is Master Healer. Gaining life and preventing damage might be more in flavor but none of them seemed interesting design spaces for a repeatable effect. The angle I adopted for the masters is have them reward you for doing something mages of their color like doing. Here are some counters to thank you for gaining life!
Power level here is pretty solid, one mana for two counters is nice, somewhere between Ajani Pridemate and Archangel of Thune. I could see this fit nicely along with some Soul Wardens but again the creature is probably a little too slow for modern.

Next is black with Master Necromancer. Guess what, this guy wants you to reanimate creatures.
The masters are Gray Ogres, – 2/2 for 3 – which is fine in limited, but they also don’t always do all that much else. Master Necromancer would need support in his block to be useful at all.
If there was things like reanimation spells or even just undying floating around though, then we would be in business!
This could turn into a very nice upside, though ultimately probably not as powerful as Xathrid Necromancer.

Master Pyromancer! Again I think here is the obvious proof that I didn’t want the masters to become modern staple, hence I probably made them slightly too underpowered.
Getting free burn is something red would be very happy with, but I could not resolve to making it a Shock – 2 damage. I figured adding Shock to all spells would be like an everlasting Glacial Ray. What I didn’t factor in was that being a 2/2 for 3, most burn decks would still probably find it too slow to add their arsenal.I might have had cold feet on this one, you’ll tell me what you think. 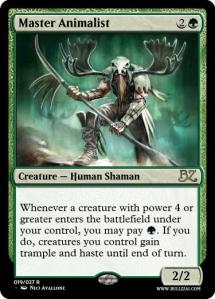 Last color is green! Master Animalist likes big guys.
Unsurprisingly, this one is more likely to be good in limited than constructed, with creatures being so much more important.
I think it is very fairly balanced for a rare, yet exciting to play in limited. I don’t forsee many other applications for him other than maybe commander, but that’s not a big issue. We need cards like that!
All in all I like it. Would cast. 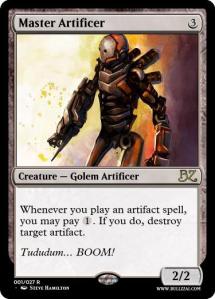 And now for the bonus round, we have an artifact creature. Master Artificer blows stuff up for fun. Being able to destroy artifacts when you play one is most likely useless in limited, again unless the format offers support for it – that would be, having lots of artifacts, basically.
Now for constructed it’s a different story. Destroying up artifacts can be nice, but Master Artificer not being able to do it on his own is an issue. What is funny is that this could actually be good in Legacy, with cheap and incredibly powerful artifact flying around everywhere.
Imaging your mox coming into play tapped and destroying your opponent’s!
I’ll be honest, still I don’t don’t think Legacy decks would want to spend 3 manas on a 2/2 just for that effect, which seems to be the theme for this series in the end. I think my vote goes to ‘back to the drawing board”.
That’s all of them! In the end I believe most of the masters need a slightly higher impact to be printable, but I like where they are trying to go, and I like the flavour of the cycle. I hope you liked them too, and maybe you can help me make them a little more significant for constructed play!
Since it’s been a very long post I will only show off very quickly that I won my local pre-release 4-0, and it’s been a ton of fun. I hope you all had a great one too, maybe we can go back to that in a next article. Have a great week!