Hi everyone. You might have guessed, another week without work on Monday and I mistook Thursday for Wednesday again! Sorry for the delay, everything should come back to normal now. Our theme this week is going to be life gain. Two designs came to me in a short succession. I wasn’t particularly trying to fill a contract but they are still linked by the fact that they will tend to make your life total go up.

Our first card is Searing Light, which to my great surprise isn’t a used name already – probably too many other searing things existing.

I was thinking about Soulfire Grand Master, and how we now know that Instants and Sorceries can have lifelink but aren’t printed with it yet.

For some reason I ended up falling in the middle and made a spell that grants lifelink to others, much like grand master. Unless I misunderstand the rules Searing Light shouldn’t have lifelink itself, hence not be strictly better than Lightning Helix, which would be completely dumb. 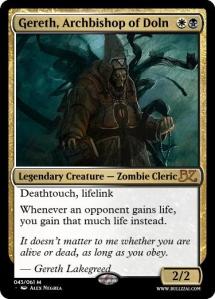 Gereth, Archbishop of Doln is a typical design gone out of control. My initial idea was to make the life stealing ability, quite obviously.

I first opted for creating a white bear which is something I’m defaulting to too often, I can now see that. But then I decided to make it black as well, and found this illustration that I felt was calling for a legendary creature. Two abilities later, we have ourselves a tiny bomb.

I think I could have made this card a bigger creature with more interesting abilities, since it’s a legendary mythic.

I’m still happy with the way the designs turned out, especially the instant. It would make for an interesting constructed card, but not overpowered either unless I’m missing something. I doubt so, seeing that Soulfire Grand Master can already do the same things.

I hope you enjoyed the article! I’ll be seeing you next week, this time on Wednesday. Have a great week!