Hi all. Great news: this week, we’re creating a mechanic! It has been a while I wanted to do that. To be honest what I had in mind was an even simpler type of ability, but I like what I ended up with. Let’s not wait any further and see what it is. To elaborate on the theme, this week we have a common, an uncommon and a rare. 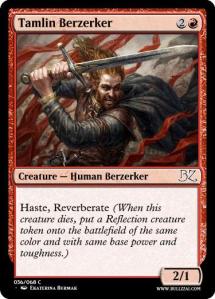 Tamlin Berzerker – seems wizard actually writes with an s – is our common and our keyword is… Reverberate!

When the creature dies, you get a token copy of its vanilla self. In that respect it is very much situated between Persist and Undying, but somewhat simpler.
Our new mechanic presents the one major inconvenient that it’s hard to represent with a token, but I’ll be hopeful that we can solve that. Flavor can be built around it too. It create a great design space for creatures losing their abilities.
The Berzerker himself I think is an ok red card, not great but playable – not even begrudgingly. 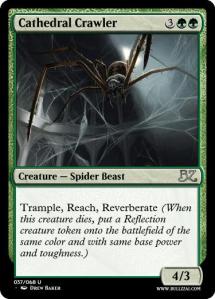 Cathedral Crawler is next.
This one was harder to balance. As it turns out 4/4 for 5 green uncommons do have a nice upside at times, but I did want to add Trample and/or Reach to the spider, and that did restricted me in terms of potential power level as I didn’t want a 6 drop either.As you can see I opted for both, but I had to tune down the creature by taking one toughness away from it.
What do you think, is it reasonable now? Seems like a very solid creature to me. 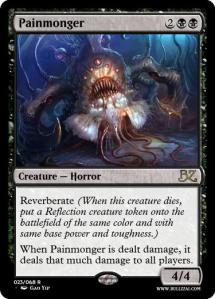 Painmonger is our rare and final card. It is as well the most hard to evaluate and balance, but it gives off a good vibe to me. It reminds me of good old “Suicide Black” strategies.
What I wanted for black was obviously to make a creature with a downside, that will lose it in its reverberation form.
I played around with a creature that only dealt damage to its controller first, but I didn’t like the way it came out. It would have had to be way too good to compensate. I ended up making the effect symmetrical and much more powerful by consequence. I think it’s still printable though.
That wraps it up for this week and our new mechanic Reverberate! I hope you liked it, like I said I believe the token representation is a major issue, but otherwise I love the idea of it. Have a go at it, see what awesome designs you can create with it, I do think it’s got potential.
Either way, now is time to wish you a great week and say see you next time!

Hi all. There is an interesting phenomenon happening regularly with my articles: I get inspired to create a design, then start wondering about how to tie it to a theme. The fun part is to get to the essence of the first design – what makes it special – then try to apply it to others.

What found for topic today is “beeffing up familiar one mana creatures” and here is the original card that made me come up with it. 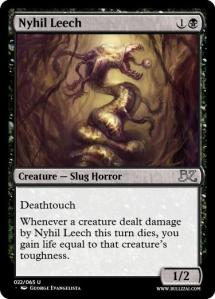 Nyhil Leech is the supersized version of a one drop deathtoucher like Typhoid Rats. Cards like this are now a staple in limited.

What can we do if we bump up the cost to two manas? This ability I came up before I gave it to a cheap creature. It is much like lifelink, except it doesn’t care how much damage you dealt, rather how big the opponent’s creature was.

I then remembered that it’s the same ability you can see on Abattoir Ghoul, except I think it synergizes with deathtouch in a much more fun way. Neat little creature, wouldn’t you say? 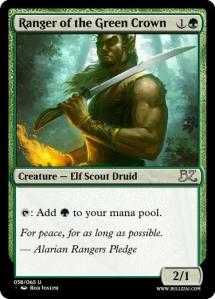 Ranger of the Green Crown is quite obviously a bigger Elvish Mystic. We have had examples of two mana “elves” recently with Voyaging Satyr and Whisperer of the Wilds.

Now this guy, he might contradict New World Order a bit. He is creating a tension between being a two drop that wants to go to battle and being a mana elf for two, which usually comes with an upside that’s related to making mana, not attacking.

Now, saving this for last as I just realized it: the card exists!! Silly me… It’s Golden Hind.

I won’t be able to make another card on time, and it’s a fun fact anyways. I’m sure Golden Hind might have been in my subconscious but I’m still happy I “came up with it”, and the only significant difference I had from the original is rarity. Pretty cool, right?

Hope you enjoyed this week’s article; I am now going back to a very busy week myself. Have a great time and see you next week!

Hey everybody! Got you a special episode today, it’s time to get goofy. The new designs this week are based on word play, which I promise will be better than it sounds. Have a look, see for yourself. 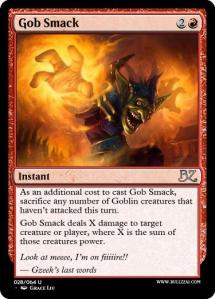 Our first card, Gob Smack – get it? – I tried to make somewhat playable. I’m basing myself on Fling and making it better, sorta.
Being able to sacrifice multiple creatures sure is practical, even though goblins most likely won’t be very big. I didn’t want to allow a player to sacrifice all the creatures he just used to attack with though.
As it is now, I figure you can either attack with your little green dudes or throw them at the enemy for the same effect. This very much make it a Falter effect of sorts – which should be reasonable – with an extra instant speed component to it. 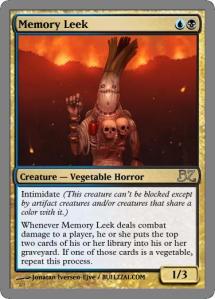 Memory Leek is based on… Mana Leak. Now the hilarious part is I thought Memory Leak existed until a moment ago! It really should, it’s a great name.
Memory Leek though… It really had to be a silver border card. So I went all the way and busted out the sweet old fashioned frames for you.
The idea is that there would be a vegetable theme, which I believe I’ve seen before on reddit and is a great idea for an un-set. As a card it is very reasonable in power level. On one hand 1/3 semi-unblockable for two is pretty good, and on the other the mil effect is relatively low impact.
Fun stuff? Good stuff? At least you have to give me that it’s good to change things up a bit once in a while. I hope you enjoyed the cards, I will be back next week for more traditional designs.
Until then, have a great one!

That’s it, I’m switching to creative titles! How do you make up one for two randomly themed designs anyways? As you will see, this week’s cards mostly add up to this. Let’s not wait any longer and just get to it. 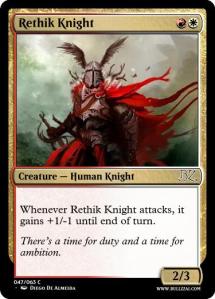 Rethik Knight is, well, the Knight part; you might have guessed.

It’s a very simple design, that I probably don’t need to explain for too long. That being said I’m surprised nothing of the sort was ever printed.

As far as power balance goes, I think it’s fine. It fares ok among other RW creatures, and is possibly slightly underwhelming compared to very similar ones like Wojek Halberdiers, which is why I made him common.
After further consideration though, I mostly think it’s good enough for uncommon. 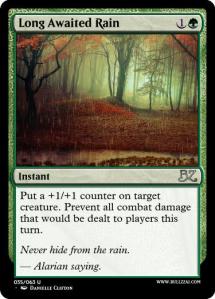 Now for the Mist. Long Awaited Rain isn’t quite a mist actually, but if you are a Magic veteran you will know that its core mechanic is called a fog effect.

I really like this instant. I think it would become one of the commonly disregarded yet more powerful than given credit for designs in limited. That type of cards tend to not get much love there.
I have noticed a tendency from Wizards to create some limited playable fog effects though, I hope this would be one of them.

You could use it as a buff, a fog, and even a removal if you are lucky enough. Fun times.

This was all pretty straight forward, yes? One thing I wanted to do was simpler, limited oriented designs. I think I might have still erred somewhat, in the sense that I couldn’t quite produce obvious commons but still, close enough. I’m pretty happy with how things turned out this week.

I hope you enjoyed those, I will be back next week for more! Have a good one.