You might have guessed: today is all about blue! We are going to study two different phases of water, which now that I think of it makes me wish I had thought of making a third one. 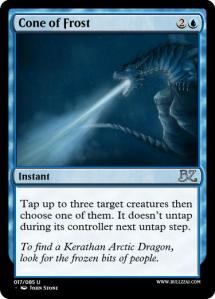 We are starting with ice, and Cone of Frost.

Tap three creatures, one of them doesn’t untap. Simple and efficient. The name comes from Cone of Flame. In spirit, spells that make a 1-2-3 effect, such as Incremental Growth represent a cone better, but I do think 3-1 effect does a good enough job.

I based the stats on Frost Breath. While it was a powerful enough card to begin with, I replaced keeping one more creature tapped next turn with tapping a third one right now, so I think we might be ok. Very aggressive card though. 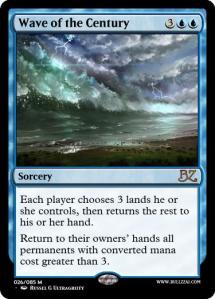 Wave of the Century.

You could call this one a spin on Upheaval. The idea is that everybody find themselves not with all their permanents in hand, but almost.
They will get to keep all 3 drops, plus 3 lands.

Starting with your opponent, everybody gets to “start again from turn 4”. One major difference though is that it costs one less than Upheaval, and as such it is going to be easier for you to cast something in the same turn as wave. I wonder if that puts Wave of the Century over the top… Do tell me what you think about it!

I was a bit rushed this week but I took out some designs from my vault of ideas, so hopefully the quality was still there. Give me feedback on those, I would love to hear what you think about them.

We shall meet again next week, until then have a great one!