Hello, hello. Welcome to our alternate reality, where we are going to have a look at what other mechanics might have existed in Magic Origins. In all fairness those are inspired by the existing ones, and the first even relies on one of them. Let’s dive in and look at the detail. 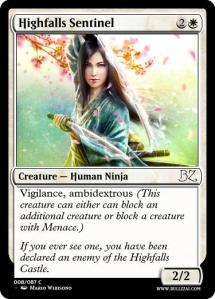 Highfalls Sentinel is a pretty basic creature, albeit a bit pushed at common.
Our first mechanic, Ambitextrous, means that she can either block two creatures – rather one more than she already could – or block a creature with Menace, which would normally require two creatures to do so.
Sentinel uses both her arms and blades, so that’s a cute and flavourful mechanic.

The way I templated Ambidextrous, she can only block one creature with Menace, even she already could block 2 or 3 creatures, but it is simpler that way. 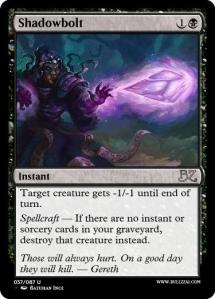 Shadowbolt shows off a variation on Spell Mastery that is Spellcraft. It isn’t a very complex one, but it seems viable.

If you don’t have any instant or sorcery in your graveyard, Shadowbolt won’t only do -1/-1 do a creature. It will kill it.

Bolt is bellow Murderous Cut in terms of power, but synergizes quite well with it and other Delve cards, or even Snapcaster Mage.

It might be constructed around, but overall I wouldn’t imagine it is as good as Tragic Slip.

Hope you liked this wee’s cards!
I would say the mechanics are solid and it would be fun to try and make more cards using them. Spellcraft might need some support though. If you leave it as “first card with spellcraft is great, following ones aren’t” it is going to be a bit boring to play and feel bad. Fortunately we can easily remove cards from graveyard if needed, by making more cards exiling or retrieving spells from there.

In other news, we are approaching article number 100 quite quickly. I haven’t planned anything for that event but I might… I will keep you posted!

Until then have a great one and see you next week.