Hello everybody! Today I will finally feature what I have been teasing for a while now: my own custom made set of about 250 cards!

My girlfriend had this made as an amazing birthday present a couple weeks ago, and I have been sleeving them, making them into decks and play testing them with her since then. Now I can finally show the world.
She had the help from San Francisco printing company in called HH Imaging, and the result looks pretty great! Click the images to see for yourself.

As you can see they have a beautiful back that sports the name Ominous, which is part of a rebranding that I am working on.
Bullzzai is my brand for Magicky things that I named after a life long nickname Banzzai. In the past few years I have taken on blogging, app making and streaming and I want to create a better brand under this more catchy name. 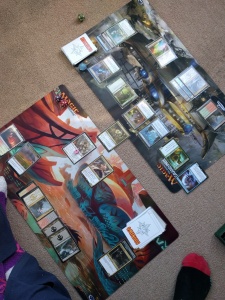 From having sleeved and played those cards I can tell you that they are at the same time amazing in quality and impossible to mistake for actual magic cards. They are slightly thicker, definitely glossier, and from a minor mistake slightly too big to fit in non clear sleeves.
At the same time, both the Ominous background and the Magic Set Editor template are well different from actual cards, which I think is great as I am not trying to make fake cards. Those still look and play fantastic though.
One minor issue was I ended up having to use clear sleeves and put Ominous cards in my basic land sleeves as well, to show the same back. 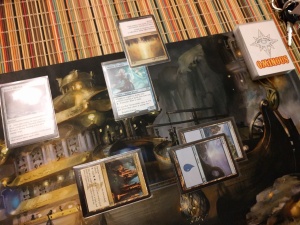 Now the play testing is definitely the best part.

It is a blast being able to actually play my favorite designs from the past two years against each other! It wasn’t the easiest making decks out of cards that were not created to function with each other, but with the help of mana fixing I could create two 3 color decks that are really fun.

Here you can see my girlfriend wrecking me by casting a rare Angelic War Leader, followed by Eternal War, that destroys all non-demon and non-angel creatures!

I was feeling a bit salty but couldn’t resist immortalizing the bad beat. Playing them made me wish my designs were perfect, and now I want them to better them even more.

As such, today I decided to feature two designs that I have been playing with recently and I think should be fixed. Let’s have a look at them. 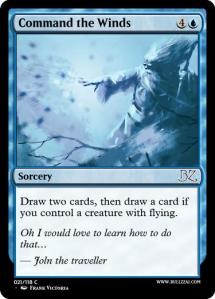 Command the Winds original version costed 4 manas.
I figured at the time that since I added the “only if you have a flying creature” clause it would be ok, but it turned out being all too easy to make happen for a killer effect.

I toyed around with the idea of making it draw only one card if you don’t, for the same cost, but that would then make for an either useless or amazing card.
With a cost of 5, Command the Winds becomes a less powerful version of Jace’s Ingenuity, which feels better to me. More playtesting to come!

Orzhov Hypocrite used to have first strike and lifelink and drain you for 2 when coming into play.

First strike on a 2 drop seemed way too powerful for my format, given that I was playing it in a Mardu deck facing much less aggressive green and blue designs, which didn’t help at all.

Even then, I feel like vigilance and lifelink makes for a more balanced design. I now wonder if I could have kept the initial drain to 2 instead of raising it to 3 as I did for this version. What I needed to do though is raise its toughness from 1 to 2, which makes total sense here.

What do you think? I am happier with the new versions of my cards; it’s definitely a minor bummer to realize your designs are broken but it feels great knowing that you can make it all better and keep iterating until they are truly fun to play.

I want to reiterate huge thanks to my life partner for this amazing gift. I was the happiest unwrapping it and I will love playing over and again and bettering myself as a designer in the process. I hope you enjoyed the story, I will probably revisit other ones in the near future, as I play more with them!

Look forward to it and until then, have a great week!