Hi everybody! One day I will fail posting my weekly article, but today is not that day. I have prepared a couple of designs before I left for my christmas vacations and now is time for me to present them to you.

Our not-so christmas-y theme is… White Eldrazi! You have probably noticed that the choice was made to create Eldrazi creatures in all colors but white in Battle for Zendikar. Even though I don’t think it was a mistake, I would like us to try and think about what those might have looked like. As such I have two candidates for you today. 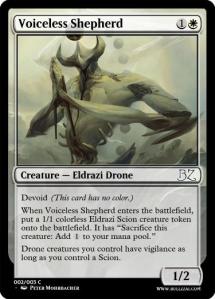 This little guy has a very odd body. We usually like to describe such a card as virtually a 2/3 for 2, which is great. It also has the upside of being spread on two bodies, one of which being a sometimes useful scion token. As Bow on that package, shepherd gives vigilance to all Eldrazi Drones as long as you still control Scions.

Power level on this card is very intricate and rather hard to figure out, but I think it’s fairly high. A 1/2 body could still be very underwhelming, so I think we’re not risking being too good either.

Void Contemplator is our Processor of the day.
A very straight forward one. I can’t imagine there is anything wrong about it except perhaps being a little weak, which is fine.
I based myself on Oracle of Dust, though being a bit put off by how easy it is nowadays for blue to get a 3/5 for 5, I downgraded this one. In the end it was an arbitrary decision that hurt the card and might have been less justified in white, but I think the design is still acceptable if not powerful. We can always tweak the numbers back up.
Void Contemplator’s ability is very white and I think deceptively powerful.

That’s it for our snow-colored giants today! I hope you liked them. I created a contest in my designer group and had several people come up with more of them, which was quite fun.

Now is time for me to get back the my christmas celebrations, I hope you are all having a great time during the holidays and I’ll be seeing you next week!