Hi all! Welcome to another edition of Ominous designs, episode 116 to be precise. This week’s making of episode is already accessible on Responsible Gaming youtube channel for you to see. Today, following the Oath of the Gatewatch release, we are going to look at colored devoid creatures with abilities using the new colorless mana symbol. I am loving those and I want more of them!

Void Born Replicator is the first one.

This one is very simple to understand. He is the Eldrazi cousin to Kiki-Jiki and the recently banned Splinter Twin.

In classic Eldrazi tradition, replicator at the same time has a competitive body and a very potent ability that uses the colorless mana to justify its power level.

On the other hand I am reasonably happy that using a mana to activate will protect it from being abused the way similar cards have been.

If you watch the video you will see me go back and forth a bunch on this design. Part of it was a top down design from the picture, with the theme of the week in mind.

I tried to make eraser be a hate bear, but this is the closest I got. Just like I said for replicator though, eraser has good stats and a powerful ability fueled by colorless mana. I don’t think it is bad and I don’t think it is too powerful either. Being able to remove an enchantment each turn is ok, it would have been much wilder to remove artifacts that way.

Simple, yes? Those are your designs for the week, I hope you liked them! I think they look good, hopefully they are reasonably balanced as well. Do let me know what you think and comment anywhere, social media or streaming services. Next week I’ll be announcing my upcoming holidays but we have one more article before that.

Until then, you all have a great week!

Hi everybody! The lot of you are all very welcome to the 115th weekly article of Ominous Designs. This week’s making of video is already available on youtube, do check it out.

Today we are going to do look at cards that are investments. Now that I think of it, it is about the exact opposite to debt but I couldn’t get myself to change the title. I think it’s a pretty good one.

Lakegreed Hellraiser is our first card.

You might remember Orzhov Hyprocrite, or more generally Phyrexian Processor.
This cute little demon priest here works the following way: you invest some life and you get rewarded by an army of lifelink zombies. It will take some time but the offer is pretty enticing, isn’t it?

You have to pay 2 mana and 3 life and wait a turn for your first, tapped zombie but somehow I feel like this might still be a little too powerful if left unchecked. You can create a 2/2 lifelink every turn! Return on investment: 3 turns after you casted it. 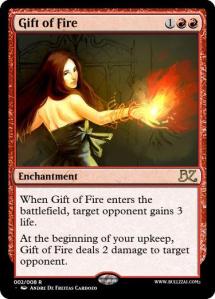 This one is a spin on Sulfuric Vortex.

Gift of Fire is all maths and power balance. It is actually pretty hard predicting what is the strength of a red damage spell that starts by giving your opponents some life!

Your reward though, is to have said enchant then burn them for 2 every turn. It goes: turn in play +3 life, next turn +1, next -1, next -3, and then 2 damage onwards. Return on investment: 2 turns after you casted it. 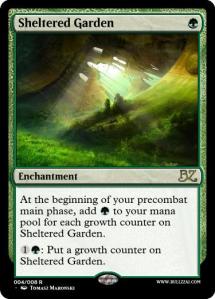 Sheltered Garden.
What do you invest for in green? Mana. For balance, I tried to learn from Eladamri’s Vineyard and Frontier Siege. My intuition is that the card is mostly fine as is, possibly not too powerful. I don’t think I could make the ability cost 1 though and I can’t really tweak any other knob.

Garden is still a fun card to drop on turn 1 in limited, and I could see a heavy deck invest a couple more turns into making it a reliable source of ramp mana. Return on investment: Depends on your investment. 4 turns if you play it turn 1 and invest once on turn 2.

That wraps it up for the day! Those were fun, definitely even harder than usual to balance though. I am really looking forward to reading people’s opinions on their power level and how we can tweak them. I do hope you liked the cards, now is time for me to wish you a great week and tell you see you next time!

Hello everybody! I am pleasantly surprised by how many of my recent articles are containing a new mechanic. Today is part of that trend and the mechanic of the week is called Thorns. You might be familiar with Thorn Elemental, who I explain in my weekly video was the inspiration for the following three cards. Time to look at them, shall we?

Thornspine Mongrel is our classic bear declination of the mechanic, to ease us into it.

As you can see Thorns functions the following way: whenever the creature becomes blocked, it deals damage to defending player equal to its thorn number for each creature blocking it. If you block this charming puppy with one creature, you still take 1 damage, and if you block it with two you will take 2, etc. Such is the power of Thorns 1.

It seems completely to me fine for a common, since most times you will only need to block this guy with one creature to get rid of him.

Shardwind Hellkite. Now we’re talking!
This one is emulating the somewhat recent tradition of extremely powerful flyers with haste for 5 mana or less.

As a 4/4 flying dragon with haste for 5, Hellkite rivals with Stormbreath Dragon and Sarkhan, the Dragonspeaker. Those have another upside as well though. Hellkite’s upside is that if you ever find yourself blocking it, you will take at least 3 damage. Since blocking huge dragons isn’t something you want to do too often, I think it should be reasonable, and probably not as good as either Stormbreath or Sarkhan. 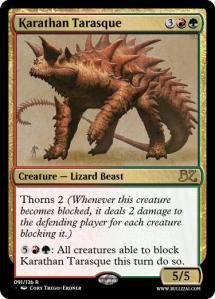 Karathan Tarasque is actually the first idea I had when toying around with the concept of Thorns.

This lizard beast is a big dummy, one that will already deal you 2 damage if you chump it and 4 if you double block it. The twist though, is that when you get to 7 mana, it can force all creatures to block it, dealing them and the defending player a whole bunch of damage in the process.

I had some trouble tweaking the power, cmc, thorns and ability cost perfectly so I went for a conservative mix. Tell me how good you think we can make it!

That does it for the day. I do believe the Thorns mechanic provides an interesting design space. Like I said in the making off video, I could see people claim that it is too trivial an effect to make a mechanic out of it, but I disagree. I think you need simple mechanics, keywords to create design spaces without using as many words all the while adding cohesion and a theme. In a set featuring Thorns you could have other cards that care about blocking, forcing to block or not block, preventing damage without blocking etc.

Either way I hope you enjoyed the cards. Let me know what you think and regardless I’ll be talking to you again next ween. Have a good one!

Hello everyone, happy new year! Welcome to this 113th episode of Ominous Designs. This blog is the last item on my rebranding task list, and I have been working a lot for that recently! As I have mentioned last week, you can now follow Ominous Designs at Responsible Gaming, on both facebook, twitter, even live on twitch and youtube! As usual from last episode and onwards, you can check out this article in the making as an episode on youtube here. 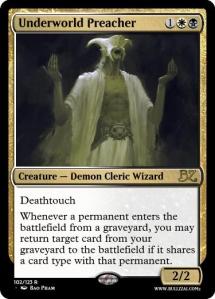 Underwold Preacher is a fun one.
Whenever anything comes back from a graveyard, he will reanimate something else of the same permanent type for you.

I assume this will mostly be useful with other reanimator cards, though right now I’m thinking it’s also quite awesome with things such as Persist, Undying and Unearth.

If you push it a bit, it can also be used with Crucible of Worlds or Obzedat’s Aid. Note that preacher will also do fun things whenever your opponent reanimates things themselves. 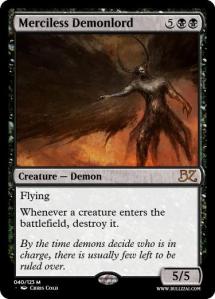 Merciless Demonlord.
I wanted a splashy black bomb. And boy is it one!

Demonlord says whenever a creature enters the battlefield, destroy it. Just like that. The only similar effect I could find out there was Lethal Vapors.
I pondered the fact that it mostly means no more creatures, which isn’t quite as bad as Deathbringer Regent‘s ability, and still leaves the door open to some enter the battlefield shenanigans.
At the end of the day I think the game can survive a flying demon for 7 that says no more creatures, but it would definitely be fun for casual.

Those are your cards for the week! Creating my Responsible Gaming is definitely a bunch of work but I’m slowly getting the hang of it. I got some amazing logos made for it, and I’m quite happy with the state of the youtube channel already. Obviously you can expect a lot more progress to come.

Hope you’ll enjoy all of today’s content; do check out the videos, especially the latest one that I tried to keep shorter, and let me know what you think! I’ll be seeing you next week, until then have a great time.