Hello everybody and welcome to episode 144 of Ominous Designs, inaugurating a series for which I have been publishing entries for a while now, and is titled From Above. As you might have guessed this is top-down designs we are talking about. Top-down design is when I think of a character or object, mostly independently Magic, and then make the concept fit the game.

Every now and then I don’t have a particular idea for a theme and I will browse through my vault of ar, pick a couple nice ones and make cards out of them. To illustrate this, let’s now have a look at a big creature, a big enchantment and a big artifact, all of those in only 3 cards! Isn’t that exciting. 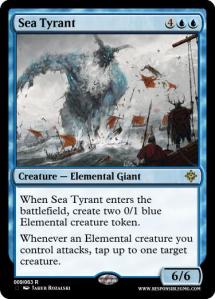 Sea Tyrant.
Doesn’t he look amazing? I couldn’t resist making a card for what seemed to be an obvious Titan. This second ever blue giant is also an elemental though, and his power is mostly inferior to that of Frost Titan. Pretty high bar that was, though; I’m quite certain Tyrant still do quite the job at finishing games, with his large body and good ability.

Tapping three creatures when attacking is no small feat, even though you aren’t likely to do that more than once. His interaction with Master of Waves is pretty amazing but I would venture still acceptable. Tell me if you think so as well. 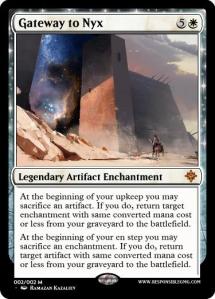 Gateway to Nyx.
Talk about a top-down design, right here! What I saw in this illustration was the combination of the starfield of Nyx and some more earthly human construct which inspired me with a design turning artifacts into enchantments.

The end result is pretty wordy but in a nutshell, at the beginning of your upkeep you can recycle an artifact into an enchantment and at the end you can do the opposite. You can even trade Gateway for say a Duplicant in the same turn you played it! I tried to keep the power level in check but this is still some potent piece of Magic technology.

You know what I am the most glad about? Not having to pick a different title for every top-down article! It’s the little things that count… A series is a good thing to have, so everybody should be happy now. I do like the cards as well, so I hope you will have good things to say about them.

I will leave it as that for now, see you next week and until then: play responsibly!