Hey everybody, welcome to episode 148 of Ominous Designs. One last episode before I take a week off, go on holidays and return for #149 and most importantly #150 extravaganza!

This week we are going to take a look at mechanics from the recently released block Kaladesh. I had a ton of fun at the pre-release and I want to feature a few of the new mechanics in two cards, today. 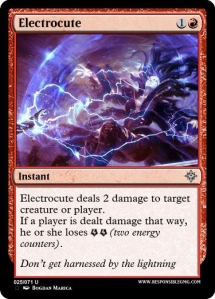 I can’t believe this name wasn’t used yet, though I could imagine it being a little gruesome.
Short Circuit isn’t used either! I didn’t have an illustration for that one, otherwise I would have gone with it.

This card is just about the antithesis to Harnessed Lightning, and even almost doubles as a counterspell against it. Note that spending energy to activate abilities doesn’t use the stack though, therefore you won’t be able to preempt usage of cards like Bristling Hydra with this burn spell. 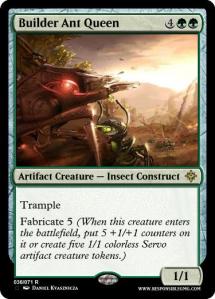 Builder Ant Queen is quite obviously Ant Queen‘s cousin. Sorry but I could not think of a better name…

In a very simple and clean fashion, this insect construct utilizes the new mechanic fabricate to give you a choice between a 6/6 trample and six 1/1 creatures. What’s not to love?
The queen might even be stronger than you think, especially played along Kaladesh’s multiple blink and bounce effects.
A 6/6 and 5 1/1, or even 11 creatures? Sign me up! I would love to have a creature like this one at the top of my limited deck curve.

And that’s going to be it for a couple weeks! I hope you enjoyed the designs, do let me know what you think on the outlet of your choice. I will be back in two weeks for 149, just before the big show down of 150.

Until then, you all have a great two weeks and play some great games. I will see you next time and until then, play responsibly!