Hello everybody! Welcome to Ominous Designs episode 157. Today we are making some fuse cards. I am going to keep the design that inspired me with this theme for the end, so that we can start with an uncommon and then do a rare. Shall we get started? 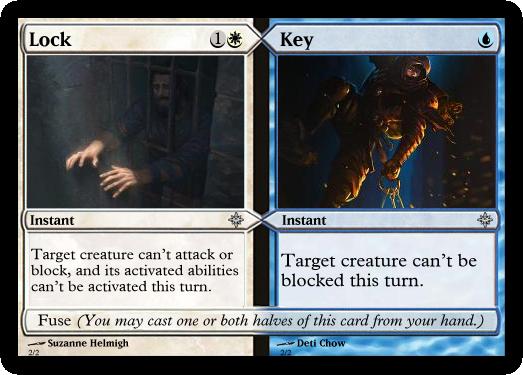 Incidentally, I made my second design based on names that I found on some wikipedia entry. – siamese twins names, a very useful one – It is also my favourite design of the week. It is simple, elegant and probably well balanced as well as powerful!
There isn’t too much to say about it, except I did consider using the detain mechanic because it and fuse are both native to the plane of Ravnica. But since Lock is meant to be a tempo play, I wasn’t too fond of having it last two players’ turns. By tuning its power level a bit that way, I could also make sure that 3 mana would be reasonable for the two effects, making it much closer to Artful Dodge than you might think, though it does have the upside of a possible use defensively. – albeit not to the greatest effect –
Like I said I quite like the card, so I hope you do too!

The concept of putting a creature into play and having the possibility of making it fight was in my vault for quite some time. I didn’t know it would turn into a fuse card but it is quite fitting now. The tricky part was to balance it.
On one hand Alive is just about a reprint of Dramatic Entrance, and on the other Kicking is even closer to Pit Fight. I lean on the fact that both of those original cards are good but I hope not so good that they can’t be put together if I throw in two very slight mana downsides. I am not aware of Dramatic Entrance being used outside of commander and Pit Fight outside of Limited, so my take is that I have made Alive // Kicking slightly better than those two in their respective formats, which might just be fine.
Some time this morning, – I believe it was one of those shower thoughts – I realized that Alive was already the name for an existing fuse card, half of Alive // Well. What can you do… I’m sure there is another name out there for our design.

It’s been fun making fuse cards! Give me your thoughts on those, I think the rare is acceptable and I am rather excited with Lock // Key.

Hey everybody, welcome to episode 156 of Ominous Designs. This week we are going to emulate what Planar Chaos did back in the day, use known designs and twist them to fit in another color. Also well described as creating cousins for famous cards. Both our designs are inspired by powerful green creatures, so let’s see what their red and black counterparts are. 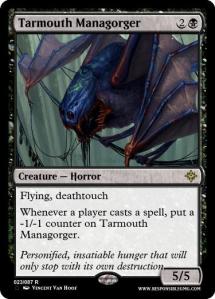 Obviously enough inspired by Managorger Hydra, the horror cousin here is almost the entire opposite to the original design.

How big can you make a 3 drop, knowing that it will steadily diminish until it implodes? That is a tricky question, one to which I decided to give the answer of 5. With flying. Also deathtouch.

Flying is here to attempt making sure you get value until 5 spells are cast, and deathtouch is as well, so that even a 1/1 would be potentially useful.

This one is the also obvious relative to Whisperwood Elemental. I tried to stick close to the original design and create a new way to manifest cards and a new payoff when sacrificing the Regent.
This big guy gives you a new manifest creature every time one of your red sources deals damage, which could get out of hand for less than 6 manas.
When you sacrificing him though, you have the opportunity to wrath the board, given you own a couple of manifest creatures at this stage, close to the opposite to the Elemental version.

How do you like our cards? As per usual I don’t think they are quite perfected yet but they should give you some food for thoughts that you can use to tweak the version you would think is the best balanced, maybe even create your own inspired designs.

I hope you enjoyed this episode anyways, I do like color shifted cards myself. They satisfy that pattern matching itch in our creative brains. Now is time to say have a great week, I will see you next time for episode 157.