What’s up everybody, welcome to episode 160 of Ominous Designs. This week I brought you two cards I created within two days of recording the episode, with no particular theme to them. Good designs though, I hope. 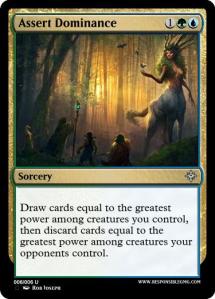 I believe this one was influenced by my great experience with Rishkar’s Expertise a the Aether Revolt pre-release, though I am pretty sure my main intent was to reproduce or fix an old design of mine you can find here.

It is a rather hard design to balance, with wild variation in power level. It can easily be a Careful Study or a Divination, but in the late game it will likely dig fairly deep into your deck.
Combine with bounce effects or pump spells for maximum effect! 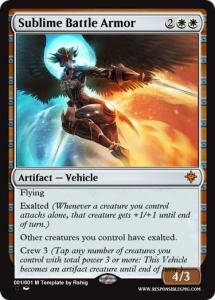 What can I say. If you don’t see where this is coming from you probably have never heard of Sublime Archangel.

I actually first thought that it would be a good way to somehow still get a use out of the creatures you have tap to crew a vehicle, which lead me to investigate the Exalted route.

Battle Armor looks great but it is mostly a give and take twist on the original design, which was a good card. I kept it white to fully mirror Archangel’s design.

That is all for today! As per usual do give me all your feedback on your favourite outlet, I shall see you again next week for episode 161. Play responsibly!