Hello everybody! Welcome to episode 166 of Ominous Designs, were we make big cards for wacky casual games. I took both of those out of my vault, and this is probably as much introduction as you need! The two cards don’t have a ton in common so let’s just have a look at them. 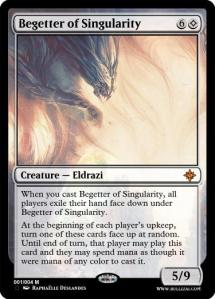 This one is definitely the bigger and messier of the two. What we have here is a huge Eldrazi creature that will exile everyone’s cards from their hands when cast, keep them all nice and warm under it.

What happens next will surprise you… Every turn, the massive 5/9 returns one of the cards at random to the active player. You are going to end up playing your opponents cards, which is always fun. I can tell people are going to complain that the effect is too symmetrical though, unfortunately I couldn’t fix that in few enough words to fit in there. 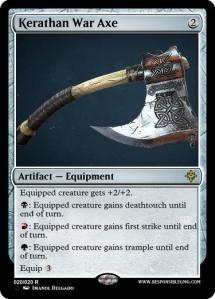 I wanted to create an equipment with multiple colored activated abilities. I very much did so here, making sure there is also an initial, static and colorless bonus of +2/+2 for all.

With Jund colored mana, the war axe temporarily gives the equipped creature deathtouch, first strike or trample, most combinations of which have deadly synergies. Keeping that in mind I decided to make the sword easier to cast but one more to equip than a sword, to prevent endless attacking and blocking with first strike and deathtouch.

That is all for the day! Hope you are excited as I am at the idea of testing those in a commander game. They should be a ton of fun.

Do let me know what you think and I will be sure to answer and maybe talk about it next week. Until then have a great time and play responsibly!