Hey everybody, welcome to episode 172 of Ominous Designs. Today we are going to look at hosers of a particular kind: two cards aimed at shutting down specific strategies that are pet peeves for many players. Let’s see what those are. 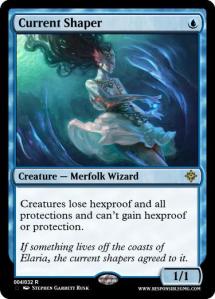 This merfolk has one goal and one only: do away with Hexproof and protections of all kinds. Those have been deemed so unfun and non interactive that they aren’t part of the evergreen abilities any more.

I figured that only merfolks would care for an ability carried by a small body, the race being home to very strong tribal themes. Shaper has an interesting application to a True-Name Nemesis mirror match-up, deactivating the aforementioned merfolk altogether.

Our little hate-bear arguably aims even wider, since he attacks all alternate win conditions that come on permanents.
Do you hate people randomly winning games with Azor’s Elocutors, Biovisionary, Battle of Wits and the likes? Chaplin is here for you. Note that this won’t prevent things such as Coalition Victory or Pact of Negation shenanigans, since those aren’t permanents. For some reason, even though I don’t hate alternate win cons – quite the opposite – I love the idea of referencing them all and shutting them down in such a simple way.

That’s it for the day! Two hateful – but really just for fun – designs that I hope you will like. Can you think of more of those? Do let me know.

See you next week for episode 174. Have a good one and play responsibly!