Hello everybody, welcome to Ominous Designs episode 175! I have two punny cards for you today so we’ll call them your May’s Fools cards, seeing that April 1st was about exactly one month ago. Let’s get to it. 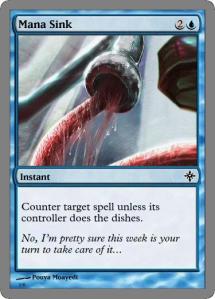 Mana Sink
The funny story about Mana Sink is that in my head this was a pun. Little did I realize at the time that the two ideas I had in mind were the same word! The other interesting factor is that Mana Sink isn’t an existing magic the gathering card, while Mana Drain and Power Sink are.

As far as the card itself goes, it seemed obvious enough to me it had to be a counterspell. In the great Unglued tradition, the wacky element here is fun, in flavor, and asks something somewhat achievable from you though in this case I would be impressed if someone would get to actually pay the cost. 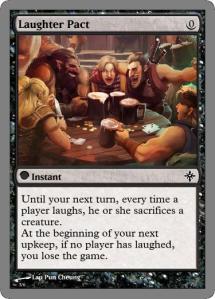 Laughter Pact is clearly enough a riff on Slaughter Pact. Talk about putting laughter in slaughter, am I right?
I always knew I wanted the card to revolve around who laughs first. It in itself is a fun mini-game to play and it fits the name.
I also aimed at mimicking the original as much as I could but I decided that wouldn’t include the “pay next turn or you lose the game” bit. Close enough though, I added the condition that you would lose if nobody laughed by the end of next turn. If you can’t make this into an edict effect for free by tricking your opponent into laughing, you will have to put on your own fake laugh and sacrifice a creature.

That is all, hope you like the puns and cards. Magic is ripe of opportunities for those, as exemplified by the two “Un-sets”. Let me know if you have more and I will be sure to mention them in our next episode.

See you next time, have a great week and play responsibly!