How Ominous. Well as it turns out it was a fine idea taking care of those 5 clans as soon as possible. This week we are tackling the last of them and this Saturday is the pre-release of Dragons of Tarkir, where all the clans are gone for good! I’m reasonably excited for the pre-release, as it is becoming one of my main if not my most important interaction with a new set these days. I’m not as much into the idea of the two-color broods and craptons of dragons, but I’m sure it’ll still be fun.

As I mentioned, now is the time to talk about clan number 5, which turns out to be Abzan. We are going to do so with a planeswalker and a creature. Abzan hasn’t really been missing on much as it had a plethora of amazing cards in the first two sets of the Tarkir block, but let’s see what we can make anyways. 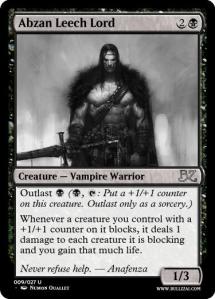 Abzan Leech Lord is here to provide us with another “+1/+1 counters matter”, one that cares about holding the fort – and by that I mean blocking.
I pushed its stats a bit, and its effect is semi splashy so I might have made him a rare.
On the other hand I’m not sure the overall power level is a lot above an uncommon, so I decided to go that route in the end.

In reality if he is too powerful as is, we can change its cost, base power and toughness or outlast cost, hence making him into a normal non-rare, so I’m not too worried. 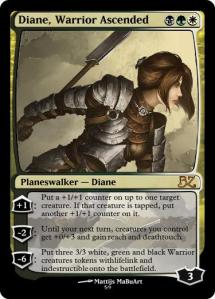 Diane, Warrior Ascended is our last Tarkir Planeswalker.
I don’t know that any of her abilities is correctly balanced, but I love the idea behind all of them. The first one is a lot in flavor for Abzan, Outlast and even Anafenza or Dragonscale General, and is a welcome twist on a Ajani-dominated +1 counters theme.
-2 is my attempt at “great protection through creatures”, which Abzan should be able to pull off. Diane’s ultimate finally brings in the warriors, again with hopefully one of the best defense you could need. Admittedly it’s not infinite Krakens, but it’s also a pretty cheap ultimate.
I think we have another case of very fun designs with probably more development work needed on them. As usual this doesn’t surprise me, as design is fun, and balancing is hard! Playtest is just mandatory for that, and obviously I don’t have time for that kind of things, as I do have a real job. I’m still please with today’s designs, more so than with the ones from the Mardu clan the previous week.
I hope you liked them too, I’ll be seeing you next week with a whole new article theme. Until then have a great week and a great pre-release! Dragonspeed.