Hey everybody, welcome to episode 172 of Ominous Designs. Today we are going to continue a long trend of designs taken from my personal vault of ideas and make it official this time by calling this article “Episode 2”. The two cards won’t be related in any other way that they are fun and well suited for limited or casual/commander play, so without further introduction, let’s have a look at them now. 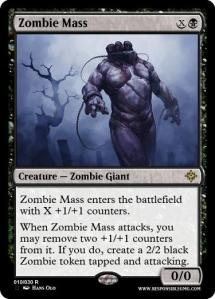 I had many versions of this card in the back of my mind for quite some time now, and I am glad it finally makes it to… I was going to say the physical world, but I guess virtual will do for now.

The idea is to make a Zombie Giant who can pop out smaller zombies from his huge, reconstructed body, reducing its own size. The ability while useful isn’t particularly powerful, especially only when attacking. Considering that it comes on top of a very flexible creature though, – mostly in size – it should be enough for a fun casual rare.

It is somewhat hard to believe that this was never made before. Creating expendable tokens is a very red thing to do, so why not create a ton of them!

I believe the hardest part in justifying this design is the cost, provided that the effect could reveal quite powerful. Here I took a hint from Gruesome Slaughter which I decided to make more powerful by not raising the cost, while adding effect. I think it is still within the bounds of a reasonable power level, but I will trust your opinions on that.

I would love to get to try those designs and evaluate how powerful exactly they are, either in limited or casual commander format. Do tell me what you think about them.
That is all for now though so see you next time for episode 173, have a great week, and play responsibly!

Hey everybody, welcome to episode 169 of Ominous Designs. Today we are looking at cards that create copies, hence the title.
Both designs are connected to a shard of mana and I think I can contain with special about them in their description so let’s just get started, shall we?

Today’s theme comes from the intent of creating a clone in Bant colors. Without looking very hard for it I came up with the idea that a green and white clone should be able to clone enchants and lands. This might seem simplistic but I think it is quite esthetically pleasing.

Why is it so hard to clone lands though? I get the feeling that there is a specific reason but I can’t put my finger on it. Do tell me if you know. As for enchantments, there is probably a way to recur this with a reanimating aura, but I haven’t found it just yet. 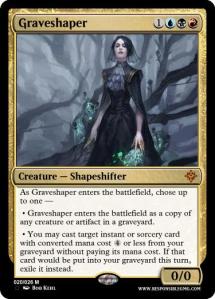 This handsome lady – actually a shapeshifter – shows what Grixis might do with clone technology. First it copies creatures from graveyard because black, then it can also copies artifacts because red. I know they both sound very powerful but I am yet to know why either would require more than 4 mana in 3 colors.

As for the blue part, I opted for copying an instant or sorcery from the graveyard as well. This comes in the form of a Goblin Dark-Dwellers ability.
All in all this one is a really powerful package.

And that will do it for now. As usual there are checks and balances to be made here but what we care about is the creative process of making magic cards, not nearly as much the play testing and balancing aspect of it, which we know takes a whole lot more time. Getting the inspiration going is what we are all about.

I hope this fulfilled our mission, I will meet you again next week for episode 170! Until then have a great time and play responsibly.

Hello everybody, I am happy to have you for episode 155 of Ominous Designs. Today we are going to review another couple of designs from my personal vault, both of which happen to cost 1 generic mana, 1 blue, and one of another color of mana – hence the title. Let’s start with red and an izzet instant.

This one is similar to something I did a couple of weeks ago, and its main goal is to finally bring us a spell that could copy either a creature or an instant or sorcery. I could be wrong, but I don’t think it has been done before!

I did want to keep the spell cheap, and I also had in mind a particular way I could make both sides of the spell weaker, with a Phantasmal Image downside or the ability for your opponent to counter the spell. It makes for an interesting and flexible package overall, but hard to evaluate without play.

Jara, Azorius Representative
This one started with hearing someone complain about Dovin Baan. I set out to create my own cheap Azorius planeswalker, and it came quickly clear that I wanted an ultimate that would mirror Sphinx’s Revelation and a minus ability that would detain.

3 might actually be a little cheap, especially since the plus ability technically could protect it as well. It might be the case that Jara should come into play with 2 loyalty counters or cost 4, I just wanted to push the sphinx a bit. I also wish I found an illustration for Isperia – Azorius guildmaster – that would work here.

That is all for the day! As usual I hope you enjoy the designs and I invite you to provide feedback on the social outlet of your preference. I will be off now and until next week for episode 156.

See you then, and play responsibly!