Hello everybody, happy new year and welcome back to Ominous Designs for our 158th episode! I hope 2017 has started well for you all, over here at Responsible Gaming headquarters we want to treat ourselves with a detox of pure and simple designs for our first article. Let’s start with a couple of creatures. 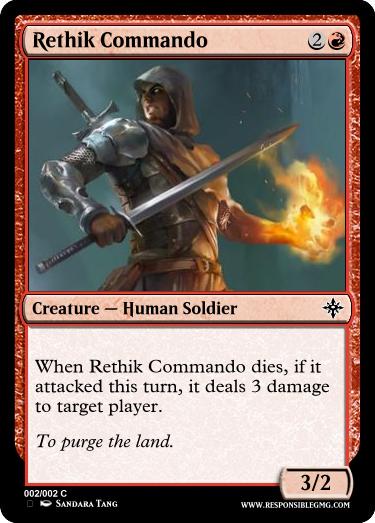 Our very first card of the year is the poster child for the new mechanic. It isn’t a keyword, but it is strongly flavored to feel like what could be a major design direction for a color in a set. To that extent you could imagine giving it an actual Ability Word.

Commando will serve greatly in an aggressive strategy since not only will it trade like a regular creature, but also ensure that some damage goes through no matter what, as long as he attacked.

As you can see the mechanic is simple enough that we could have a ton of different declinations of it with different power, toughness, mana cost and damage dealt. 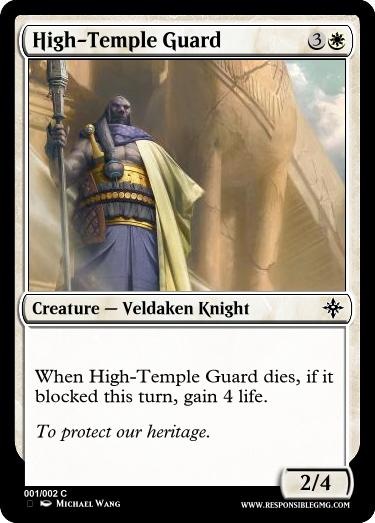 Very much the counterpart to our red creature, Guard will gain you life and it will do so if you blocked instead of attacked.

I love the organic feeling of being an ok blocker and giving you extra life, which should help the same goal of surviving and padding your life total for your late game comeback.

I was very tempted to make a 2/3 for 3 that gained you 3 life in order to reflect perfectly commando, as if one blocked the other they would bounce off beautifully. I opted not to do so because the actual white card would be pretty underwhelming. In fact I tend to think a vanilla 2/4 for 4 with marginal life gain is mostly filler.

So what do you say? I am very pleased to start the year with the simplest possible designs. You might know that I consider those to be very interesting, hard to design, and of the utmost importance for limited play. I do think we hit something quite good here and I would love to make more of those.

I have wondered if this cycle could extend to other colors but I fear it would take away from its simplicity. The best answer I could find would be to add black cards dealing damage as well and green cards gaining life. I suppose one thing I could do is switch attack and block for those, which would be very fun but also fairly confusing.

I hope you enjoyed this week’s article and I want to wish you again a very happy 2017. See you next week for another episode and until then play responsibly!

Hey back everybody! Welcome to our 2014 wrap up, the first year I have been posting all the way through. I had a nice surprise this morning, as WordPress had the same idea as I and sent me some stats about the year. I will gladly use some of those, now.

Firstly, it seems the 5 most viewed articles all happened during October and November 2014, which shows the website’s popularity is increasing. Since I stopped posting for most of December, nothing to worry about there. Here are the top 5 articles:

Check them out if you don’t remember, I will feature a couple cards from them later in this article.

The number of views and unique viewers was multiplied by 10 in 2014! For comparison, the number of posts only doubled, as I didn’t post through the whole 2013 year. Isn’t that exciting? My top referrer is google, then comes imgur, facebook and reddit. I have good hope for imgur, which I just started to use a couple months ago.Every weeks it regularly gets me one or two thousand views! You can follow me there, I post all the cards at the same time as the articles.

For locations, my viewers are largely coming from the US, though the breakdown is interesting:

47 countries overall! Small world.
I don’t want this article to last forever, so let’s have a quick look at two cards from the two most popular articles. They are pretty recent but it’s never too early to think back on designs! I used MTG Cardsmith for the new versions, as they improved a bit recently and I’m away from my computer and Magic Set Editor… 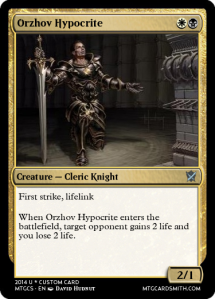 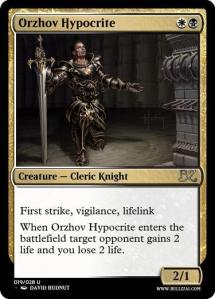 Looking back on Orzhov Hypocrite, I thought I might have underestimated the power of a 2 drop with first strike… I figured that lifelink is a nice add, but vigilance on top of an ability that makes a creature so much better in combat was a little pushed. With both, you could attack pretty safely, gain life, then gain life again by blocking the turn right after!

I did some research and 2 drops with first strike usually have either an activation cost or two of the same colored mana in their cost. That being said once I finished my edits I realized that the original design was supposed to be a rare. Not really a splashy design for a rare though. I also came across Deft Duelist who made me wonder if I needed a downside on my uncommon two-colored 2 drop with two abilities. I still think First strike and lifelink are pretty good and vigilance would put it too far up in power level. 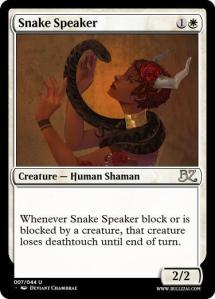 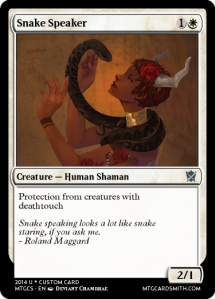 Now for Snake Speaker, I liked the original design but I wanted something yet a little more elegant for it. Protection is by far the simplest solution, and it open a great design space, such as reach creatures with protection from flyiers, etc.
Now we have to agree that protection is a lot stronger than making creatures lose deathtouch. Since the protection target is narrow, – deathtouch creatures – I think simply taking one toughness off should do the trick for power balance. Speaker could still be an amazing uncommon in a set with a lot of deathtouch, quite obviously.

So here’s for this year, I hope you had a great time coming to Bullzzai for your weekly articles. Next year I plan on still being very busy so I will probably stick to a couple cards weekly. This has proven to be a fair format, and honestly doing it right still takes a lot of work. But I’m still here, still enjoying it, and I’ll make more cards in 2015.

Happy new year to you all!

Believe me, it is a great challenge to come up with titles every week! Since I somewhat spoiled it already, without further ado I will reveal the subject of this week, hinted at in my previous post: breaking away from the boundaries of the color pie.
In case you don’t already know, the idea behind of the color pie is that each color has access to a particular set of effects, specialties and even maybe monopolies, and then there are thing that some colors just don’t do. Straight up killing – non flying – creatures is not a green thing, drawing is very rare in red, and destroying a land hardly ever happens in blue. 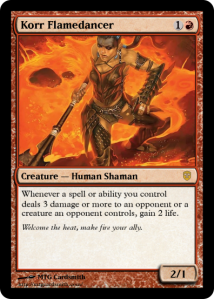 Korr Flamedancer.
So what’s something else red hardly ever does? Gain life. I could only find one card only red doing so, and its purpose isn’t quite to gain life.
Our friend shaman here does just that though, so how is that in flavor? The life gain comes in when you have done direct damage to a player through spells, not creatures, like red mages like to do.
It is restricted enough so that it doesn’t get crazy, because most of the time you don’t want to focus all your fire to your opponent’s face.
I think this card demonstrate that some abilities just can’t be linked to some colors though, as the design still feels like it should be half white. 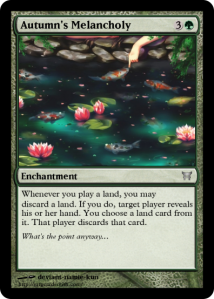 Autumn’s Melancholy.
Now we’re going to make opponents discard using a green enchantment. Again it is done through adding a spin on the ability, to make it feel greener.

Green is master of lands, isn’t it? With Autumn’s Melancholy, every time you play a land, you can discard another land to pick one off your opponent’s hand.
So if you have 4 manas and two lands, you can start preventing your opponent from dropping his. Hardly overpowered but you can make it work with green ramp! Does that feel like autumns to you?
This is a fun exercise. Try and come up with other combinations! Like reanimate in blue, fetching lands in black, haste in white… Tell me if you find great ones, I’ll gladly work on them. Have a great week!