Hey everyone, are you ready to take things where we left them last week? We are taking care of the three remaining members of the Endless today, Death, Dream and Delirium. This should be fun! 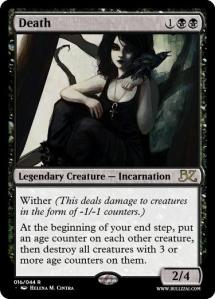 Our first design is Death. It is probably time to acknowledge some critical aspect of the cycle. The cards aren’t supposed to be as powerful, omniscient and eternal as the Endless are. This is why Death isn’t just indestructible or neither can she kill any creature. I did consider making her shuffle into your library though.

Someone mentioned that I could have kept deathtouch instead of giving it to Despair and I agree. Instead I used Wither, for the inevitable aspect of Death and the idea of decay with age. It definitely makes for a more subtle than flashy death, much like Death of the Endless herself.

Delight / Delirium. Sorry for the spoilers, but Delirium used to be the incarnation of Delight. By the way, someone reminded me that Incarnations exist in Magic, so I switched away from using Avatars. 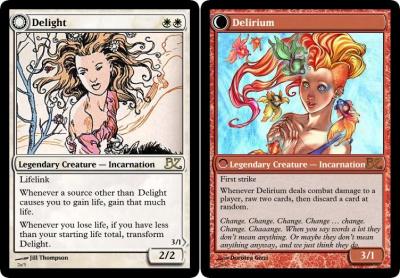 We know little about Delight, but isn’t gaining life when you were already gaining life delightful? I’d say it is. We don’t know what turned Delight into Delirium, so I opted for an event that says “the happy days of having tons of life are over”. It’s allegedly very easy to get there but why not, we want to see Delirium more than Delight anyways.

As for Delirium, again I tried to not fall into the trap of overstating things. I didn’t aim at making the most disturbed, random and chaotic card possible, or try and drive everybody insane. So I went for one of the red representations of madness in Magic, discarding at random. I did wanted Delirium to be red, because of her unpredictability.
Now ultimately 3/1 first strike with upside might still be a little overkill, even with the condition on it. You will tell me what you think. 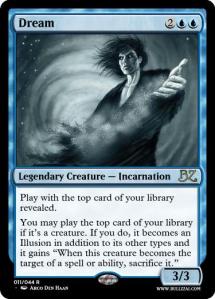 Finally, we are welcoming the Sandman himself to close this cycle! Dream will allow you to cast all creatures from the top of your library, with a downside. If you are familiar with the comic book, you know that dreams are all but illusions, but I do believe that it fits for a Magic crossover.

This might make him a reasonable version of a cheap Future Sight, but we would have to test it as it is still a very powerful ability to have for only 4.

There is an aspect of Dream I could have used for another two sided card, but I prefer not discussing that sort of spoiler here.

I hope you enjoyed them, I am looking forward to discovering what next week is going to be about! Have a good one, you all.