Hello everybody! Welcome to episode 166 of Ominous Designs, were we make big cards for wacky casual games. I took both of those out of my vault, and this is probably as much introduction as you need! The two cards don’t have a ton in common so let’s just have a look at them.

This one is definitely the bigger and messier of the two. What we have here is a huge Eldrazi creature that will exile everyone’s cards from their hands when cast, keep them all nice and warm under it.

What happens next will surprise you… Every turn, the massive 5/9 returns one of the cards at random to the active player. You are going to end up playing your opponents cards, which is always fun. I can tell people are going to complain that the effect is too symmetrical though, unfortunately I couldn’t fix that in few enough words to fit in there.

I wanted to create an equipment with multiple colored activated abilities. I very much did so here, making sure there is also an initial, static and colorless bonus of +2/+2 for all.

With Jund colored mana, the war axe temporarily gives the equipped creature deathtouch, first strike or trample, most combinations of which have deadly synergies. Keeping that in mind I decided to make the sword easier to cast but one more to equip than a sword, to prevent endless attacking and blocking with first strike and deathtouch.

That is all for the day! Hope you are excited as I am at the idea of testing those in a commander game. They should be a ton of fun.

Do let me know what you think and I will be sure to answer and maybe talk about it next week. Until then have a great time and play responsibly!

Hello everybody, welcome to episode 149 or Ominous Designs. Today we are going to set on a mission to fix some of the most powerful and what some might say broken designs of older days of Magic the Gathering. Our two patients – victims? – are Shahrazad and Umezawa’s Jitte.

Story Time
What makes it so that Shahrazad is banned in all formats? In great part it is that it takes forever to play games within games. To make it faster, Story Time’s subgame ends as soon as one life or one creatures is lost, each player can keep a creature to start, and life totals are not changed. This should allow us to use a simpler reward for the winner, like an extra turn and some life.
I now realize do that first part being triggered ability breaks the design – a player can still remove a creature in response to the trigger and win the subgame – which needs to be addressed. Maybe making it a cast trigger would work? 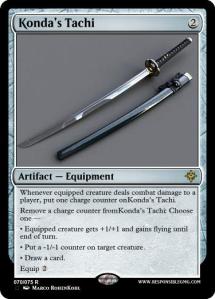 This one is pretty straightforward. Of course keeping counters on the equipment itself is great, but what makes Umezawa’s Jitte truly ridiculous is the fact that it depends on combat damage to anything, creature or player, and that it creates two counters each time. In fact, only getting one counter each turn when hitting a player, probably makes Konda’s Tachi slightly under powered.

If it is, we can easily fix that by adding some evasion to the equipment itself – skulk, trample? – and/or perhaps tweaking the modes.

I am happy with the equipment but I wish I had noticed the issue with our new Shahrazad earlier. There is a chance using a cast trigger fixes most of the issues and at the end of the day, an abusable 5 mana card that gives you an extra turn isn’t the end of the world unless it’s recursive. The biggest downside remains that the design is still very wordy and sometimes might still make the game last a fair bit longer.

That’s it for the week, I will see you next time for the big 150! I hope you are as excited as I am. I have more than one surprise in store for you, so you should tune in to the Responsible Gaming channel to see the live episode next Tuesday night, around 7PM PST.

See you in seven days and until then, play responsibly!

Hey all. I received a lot of great feedback about the Endless on /r/custommagic, turns out people are passionate about them! This week, after making my first design I decided we were going weird, push creativity to places cards aren’t going often or perhaps at all! It should be exciting. Here is said first design:

Kerathan Plagiarist. I have thought of such design before but I don’t think I ever made it. It turned out quite a bit less complicated to implement than I would have thought.
Definitely makes for a powerful card, especially if used with expensive abilities, bypassing paying for their activation.

For that though, there was already Illusionist’s Bracers which wasn’t a particularly popular card. The advantages here are that you are getting a creature, and can copy any ability being used which could be helpful to counter something your opponents are doing.

Ozynn Dynacaster came out while trying to make a second design as weird as possible.
And weird it is! So much that I don’t think it could be printed. The issue as I see it is that you don’t want to be churning out through all your deck every time, in the hope of finding a spell that you might not even have. It’s like cascade, but worse.

The card is fun though! It doesn’t do damage, but casts a spell for free every time it “hits”. The second ability was added for obvious facilitative reasons. The other remaining question is whether or not it is ok to to Dynacaster be that weak when blocked, and just do no damage.

I needed more this week so I set out to make a last design, which came to me pretty easily. It is Elarian Blacksmith, and it literally makes weapons.

There really isn’t that much to say about this ability, except that it is a much unexplored space that I assume will be filled one day, but already contains one single design, that is Nahiri, the Lithomancer.

Making it easy to use might create complex board states and is possibly a tad too powerful. Iterating on development would tell us about that.

That’s it for this week! As usual I hope you enjoyed the designs and I’ll be seeing you in 7 days for more. I’m leaving you with this equipment token made specially for Elarian Blacksmith. Have a great week! 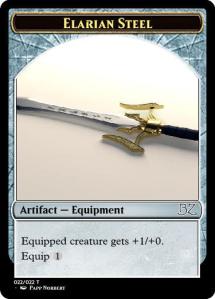