Hello everyone, hope you are doing mighty fine as we enter episode 162 of Ominous Designs. Today we are again going to look at simple and mostly elegant designs, a trend that makes me quite happy. The mechanic at play is enter the battlefield triggers offering a modular choice that will affect both players the same, hence the title.

Our first card is the genesis of the mechanic. A very straight forward design that might look purely fair even though good players know that giving someone the choice to move both needles 3 life points up or down is actually a great power.
I think putting this on a 3/3 body for 3 mana makes for an excellent limited card.

I hope people won’t complain too much about making a non regenerating skeleton, this one does a good job of selling himself like the knight, immovable deliverer of the law he his. 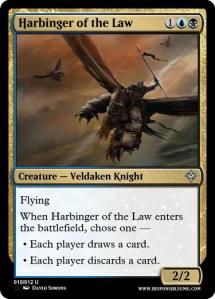 Harbinger of the Law

I have a little cute theme going on with the names here. Harbinger holds the second most obvious effect I could find that would benefit both players the same, as well as grant a simple choice of doing one thing or its opposite: draw or discard cards.

I also think that in the right hands, the opportunity to make both players have one extra card or one less is rather powerful.
When it comes on a 2/2 flyer for 3, you can’t really complain. This one was meant to be a specter though, my bad.

Manifestation of the Law

Bonus round! I couldn’t help but try and apply the mechanic to green, but it made me go to less obvious and elegant abilities.

You can really play around the targeting triggers for this one, and attempt to either make the card very one sided, or plan best you can to get a better advantage than your opponent will. Also note that when played on its own, it can be a terrible -1/-1 spell or a 3/2 deathtouch for 2 that gives your opponent a counter. Not bad on turn two if they don’t have a creature! I meant for it to be a zombie.

Three cards again, huh? Lucky you. Do let me know what you thought of those and if you can come up with similar cards for a cycle. Fun fact is that all of those are two color black creatures, but I couldn’t come up with something that would suit a red black variation.

That is all for today, time to say have a great week, see you next time and play responsibly!

Most of those modes make a build-your-own Threaten effect. The fun part here is that you can have it be instant speed, which we know is great on those effects.

If you choose to cast it sorcery speed though, you will get a bonus +2/+0 for your trouble. The other interesting bit is that you don’t even have to use all modes on the same target. You might even pick modes to create some weird combat trick.
On a side note, I do hope it’s within the rules to pick flash as a mode when casting a spell.

Planned Machinations is a simpler design.

The original mode here is can’t be countered. For the rest, we are making a blue cantrip. Power level wise, I based myself on something below Preordain but most likely better than Serum Visions.

I also based the design on the assumption that the modes will resolve in the same order they appear on the card, which I believe is true.
Those could easily be tweaked if needed for power level, as I did when creating the card, toying with different positions for the Draw a card mode. 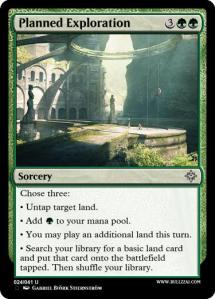 I couldn’t help but make a third card this week!
Planned Exploration wants to do every thing ramp.

It’s an expensive card though, which should help containing the power level for such effect. As far as I can tell the most you could get out of it is two extra land drops and untapping a land, which makes it close to Explosive Vegetation.

It definitely looks like it could be broken somehow though, and it would be at least fun in cube storm. Thinking back, maybe I didn’t need to restrict it to basic lands though.

I had a fantastic time building those, so I hope you will enjoy reading about them. Let me know what you think!
I’ll be seeing you next time for episode 135. Have a great week!