Hey all! I’m happy to be back in the good old rhythm of weekly couple-of-cards, away from the madness of the design contest. Here are a couple of cards that are doing more than just being a land, or just being a creature.

First is Cunning Battlemage.
If you aren’t familiar with New World Order, I suggest you read up on it; it’s interesting, and it’s also the future of Magic. Long story short, we are going to see simpler effects, better creatures, and one of the ways we can have this is to add spell-like effects to creatures. One example of this, Snapcaster Mage ended up being immensely strong though.

To make it more balanced, I opted to chose which spell the creature would come with, and make it a little more expensive. Cunning Battlemage is basically Snapcaster + Brainstorm in one card.

My first version of this card costed 3U, but I figured nobody competitive enough to care about brainstorm would want to pay 4 to have a meager 2/1 coming along with it. I’m not sure that I’m correct, but I’m thinking that what makes Snapcaster so good is its modularity, so power level should still be in check here. 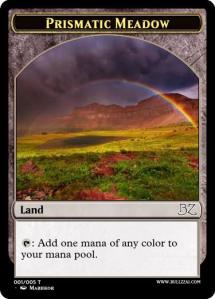 Rainbow Fields features something I wanted to play with for a while: land tokens. It is obviously difficult to balance a land that produces two mana of any color, and my first idea was to let your opponent fetch for a basic land. Knowing how amazing Path to Exile is in constructed formats, I figured that it might not be the best idea. Letting them fetch a non-basic land wouldn’t be very good either, so I took the token route!

I could have made any of the lands/token come into play tapped, but giving your opponent such an advantage also wouldn’t have been very fun. Each player getting an extra mana seems like a fair deal to me, though as it is I guess it is still pretty dangerous on turn 1, especially in very powerful formats like vintage or legacy, where players are trying to kill each other in a turn or two. Tell me what you think!

Hope you like this week’s card, I tried to shuffle things up and keep it eclectic. Tune in next week for more, and until then have a great one!