Hi all. This week we are finally celebrating the one year anniversary of the blog! It’s been great fun writing those 43 posts so far. 43 is slightly under one a week, – that would make 52 posts – but since a few months ago I have gotten pretty good at posting every Tuesday or Wednesday. I’m not completely satisfied with where my writing skills are at just yet, but I’m pleased with what I learned about running a blog so far. I now try and come up with a coherent theme every week, keep it simple, and make sure I link the content as much as I can on various social platforms.

I have lots of various celebrations events for us this week, so let’s get started. First announcement this week, I have acquired http://www.bullzzai.com! I’m still ironing out the kinks coming with the transition, but you can already change your bookmarks. Pretty exciting, isn’t it?

It can obviously do some crazy things, and will be fueled by your imagination! Past the obvious Mass Calcify, Red Elemental Blast and Nature’s Ruin combos, it can do some neat tricks with Thragtusk and let’s say… Benthic Djinn. Just about anything, really; just think about it!

I thought of giving control over your opponent’s spells as well, but we don’t want to play God that bad… Or do we?

Next! A quick preview of the work in progress on my app MTG20 LifeCounter.

It is still in progress and we have a whole bunch more to achieve before release, but so far it looks like it’s going to be great!

I’m taking a close look at how we will make the app easier and more enjoyable to use, and I have the help of a designer to make it more beautiful as well.

Obviously I’ll keep the “player profile” feature, and try and bring the draft organizer up to snuff.

Now number four:
Bullzzai is proud to announce the sponsor of our local game shop, Endgame, in Oakland CA. It’s a great shop, with a great magic community until recently lead by the superhero judge Sean Catanese. Endgame just successfully founded a kickstarter to open their cafe, and Bullzzai will be displayed on they wall of honor as a backer!

You can see the concept art for the wall in the picture here, it’s going to be quite epic. Our logo will also be on there, along with the new website url. 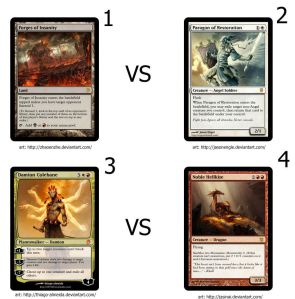 And now, our last announcement… I’m starting a contest for the best design of the year! There are 8 cards in competition and you can see the first half here on the side.

I have posted all of them on reddit and Magic Salvation forums and I invite you all to vote on here as well!

We will elect the best of those 8 designs and I will also pick the most accurate voter and offer him a few steam games 🙂 I have a dozen votes so far and am sharing with friends now.

That about wraps it up for our first year of Bullzzai designs 🙂 I have a lot of plans for the future, and I hope they will encounter greater success as time goes by. I am obviously thinking about more cards, cycles, sets, different games and apps I’m thinking about and working on as well, streaming, podcasts, updating the blog’s layout… You name it; there’s a lot of possibilities out there.

In real life as well, I’m still working on my cube, looking at commander meetups in my area, – making steady progress on a squirrel deck – and some shop could use my help as a rule advisor or judge,- I’m still training my judging skills. Lastly, I think it’s been a while I haven’t gone to a competitive event, PTQ or even Grand Prix.

Lots of things, you see. I hope you keep enjoying them. Don’t hesitate to give me vote and feedback, and see you next year!